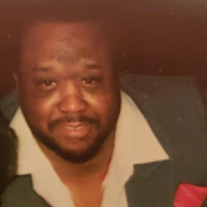 John Davis Calhoun 74, of Powder Springs, GA affectionately known as “Calhoun” received his heavenly wings on September 23, 2020. He was born on August 10, 1946 in Talladega, Alabama to the union of the late Wren Calhoun Sr. and the late Lizzie Swain Calhoun. John was a graduate of Westside High School in Talladega, Alabama where he was a star on the football field. That’s where he met the love of his life Bernadine Carlisle and they united in holy matrimony for 53 years the day that he transitioned to be with the Lord on September 23, 1967. From this beautiful union, they had two children Aundrea Calhoun Powder Springs, GA and Sonya (Andre) Brown, Douglasville, GA. He also raised his only grandson Julian Shelton of Powder Springs, GA. John was a dedicated man to his craft. He worked for General Motors Fabrication Plant in Lordstown, Ohio and Doraville Assembly Plant in Doraville, GA collectively for 40 years. He was an avid hunter and he loved to fish, cook, build his garden, and watch football and basketball. He attended New Hope Baptist Church in Powder Springs, Georgia. John leaves to cherish his memories besides his wife, children and grandchild, his sisters Mrs. Elizabeth Cooksey of Atlanta, Georgia, Mrs. Lana Weems, Mrs. Shirley Jones and Ms. Jackie Calhoun all of Columbus, Ohio. His brother Mr. Timothy (Schquita) Calhoun of Columbus, Ohio and a host of nieces, nephews, other relatives and friends. He is preceded in death besides his parents, two sisters and four brothers. Viewing will be held Saturday, October 3, 2020 from 12:00pm to 1:00pm at the Mayes Ward-Dobbins Funeral Home & Crematory - Macland Chapel, Powder Springs, GA. Funeral service will held at 1:00pm.

John Davis Calhoun 74, of Powder Springs, GA affectionately known as &#8220;Calhoun&#8221; received his heavenly wings on September 23, 2020. He was born on August 10, 1946 in Talladega, Alabama to the union of the late Wren Calhoun Sr. and... View Obituary & Service Information

The family of John Davis Calhoun created this Life Tributes page to make it easy to share your memories.

Send flowers to the Calhoun family.