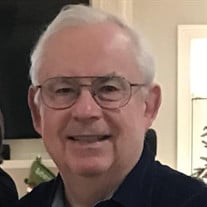 On April 9, 2020, we said goodbye to a wonderful man, beloved husband, father, grandfather, son, brother, uncle and friend. John L. Kibbe, Jr., 69, passed away after a year-long battle with cancer. John was the first of five children born to Joyce A. (Wilson) Kibbe and the late John Lee Kibbe, Sr. He grew up in Connecticut and Massachusetts. He graduated from Scituate High School, where he met the love of his life and wife of 47 years, Donna (Herold) Kibbe. A graduate of Boston College School of Management, he followed in his father’s footsteps, entering the insurance business, which eventually took him and his family to Marietta, Georgia in the early 1980s. He had a love of sports, playing baseball, football and hockey in his younger years, running races and playing golf. However, nothing brought him more joy than body surfing the waves. He dedicated his life to his family. He was an amazing father and adored grandfather, better known as Pa, who was a constant presence at band concerts, ballet recitals, ice skating competitions, and basketball, football, lacrosse and soccer games. He was also a respected and loved soccer coach impacting the lives of not just his own children, but many young men. He treasured family vacations at the beach, visiting every Civil War battlefield from Massachusetts to Georgia, and in later years, weekend getaways with his wife, Donna. John was a man, who was never short on words, ever the conversationalist on any topic, who enjoyed sparring matches over politics with his daughter, Rebecca and “work” lunches with his son, John. Always a dreamer and forever seeing the good in others, if you met him, you were never an acquaintance, you were instantly a friend for life. His memory will live on through his wife, Donna, son John L. Kibbe, III and his wife Holly, daughter Rebecca Kibbe and her partner Stefan Bunecky, and his two grandchildren, who were the lights of his life, Jack and Alexis Kibbe. He will also forever be remembered and loved by his beautiful and unwavering mother, Joyce Kibbe, his brother Mark Kibbe and his fiancé Christine Nelson, brother Adam Kibbe and his wife Kim, sister Kim Maynard and her husband Perry Maynard, sister-in-law, Lisa Forsgard, brother-in-law Bruce Herold and his wife Christine, as well as his adored nieces and nephews. While no service will be held, a celebration of life will take place at a later date. In lieu of flowers, the family asks that you make donations in John’s name to St. Jude or Children’s Healthcare of Atlanta.

On April 9, 2020, we said goodbye to a wonderful man, beloved husband, father, grandfather, son, brother, uncle and friend. John L. Kibbe, Jr., 69, passed away after a year-long battle with cancer. John was the first of five children born to... View Obituary & Service Information

The family of John L. Kibbe Jr. created this Life Tributes page to make it easy to share your memories.

Send flowers to the Kibbe family.