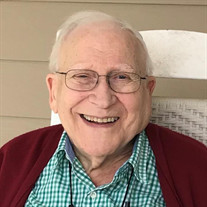 Joseph Gabriel Kedzierski died peacefully on April 30, 2020 at 90 years old. Joe was born on October 16, 1929, in New Kensington, Pennsylvania. He attended Westmoreland County Parochial and Public Schools and graduated from New Kensington High School, New Kensington, Pennsylvania, in 1947. He continued his training at the Spartan School of Aeronautics in Tulsa, Oklahoma. His work career began at Capital Airlines, and later the Glenn L. Martin Company in Baltimore, MD. Joe served in the U.S. Navy on board the USS Franklin Roosevelt aircraft carrier during the Korean War. While at Martin-Baltimore, he worked on the B-57 Canberra bomber and the P-6M Seamaster seaplane. He married Dolores Orlowski in 1954, and they celebrated 50 wonderful years together. They moved to Marietta in 1967 when Joe took a job with Lockheed-Georgia to work on the C-5A Galaxy and later the C-130 Hercules. Joe was a charter member of Holy Family Catholic Church in Marietta, Georgia. He was also an active member of Knights of Columbus Council 4599 and later a founding member of Holy Family Knights of Columbus Council 9792 and their first Grand Knight. He is survived by four proud children; two daughters Kathleen King of Marietta, and Debra Levy (Daniel) of Roswell; two sons Timothy Kedzierski (Denise) of Roswell and Mark Kedzierski of Marietta; four granddaughters Valerie Levy of Tifton, GA, Madelyn Levy of Marietta, Aidan Kedzierski of Marietta; and Hannah Kedzierski of Marietta.. In addition; Nikki Lowman of Baltimore, MD; Bryce Lowman of Atlanta; Jason Tutchton of NC; and Cydney Tutchton of NC also called him “Grandpa”. In addition to his wife Dolores, his parents Anthony and Anna (Kaczmarek) Kedzierski , and his daughter in law Lydia Musterer Kedzierski, he is preceded in death by his siblings, Clara, Edward, Stanley, Florian, Leon, Alice Planavsky, and his twin brother Daniel. He also leaves behind nieces, nephews, cousins, friends, coworkers, and extended family who all loved Joe. The Kedzierski family would like to thank the A.G. Rhodes Cobb family and the Winwood Retirement Community for all their love and support. In lieu of flowers, donations may be made to the St. Vincent de Paul Society Due to the COVID-19 pandemic no public service is planned at this time. He will be laid to rest at Georgia Memorial Park in a private graveside service.

The family of Joseph Gabriel Kedzierski created this Life Tributes page to make it easy to share your memories.

Send flowers to the Kedzierski family.