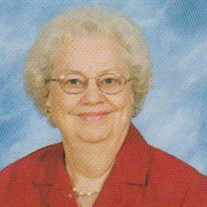 Joyce Maxine Caudell Herren left us for her heavenly home on Friday, March 18, 2022 at Wellstar Cobb Hospital. She was 92 years old and passed after complications following a massive heart attack. Maxine was born on January 30, 1930 on the family farm between Cornelia and Cleveland in rural Habersham County in the midst of what her father termed “a blizzard.” She was the daughter of Mr. & Mrs. C.D. Caudell, and the youngest of seven children. Maxine grew up in Cornelia and graduated from Cornelia High School in 1949. Maxine moved to Atlanta in 1950 and attended Atlanta Business College, and later Georgia State University. She met her future husband, Ernest N. Herren of the Oakdale community in 1952, and they married on February 7, 1953. They were married for 51 years. For over fifteen years Maxine worked in office positions with Lawyers Title, The Armour Company and Square D. Maxine was a skilled typist, stenographer, switchboard operator and real estate title clerk. Maxine left public employment in 1967 to be a stay-at-home mother to their only child, John. She was a devoted mother and wife, and she excelled in cooking, canning, sewing, knitting, crocheting and all areas of homemaking. Her passions were gardening, reading, genealogy, birdwatching and Bible study. She had an encyclopedic knowledge of the Bible and attended women’s bible study groups in Smyrna for 30+ years. After her husband’s retirement from The Georgia Power Company, she returned to work for 10 years with the Cobb County Board of Elections. Maxine will be remembered for her humor, kindness and generosity. Her devotion to her family was unmatched and she spent many years caregiving for her parents, her mother-in-law, and her husband. As a mother she was fiercely protective and instilled strong ethics, manners, a love of God, support of family and self-respect into her son. Maxine was a proud member of Bethany United Methodist in Smyrna at the time of her death. She grew up in Level Grove Baptist Church in Cornelia. In a practice that was common in rural Georgia in the 1930’s, she was baptized in Little Nails Creek in Banks County at the age of nine. Maxine was preceded in death by her parents, her six siblings and her husband. She is survived by her son and several nieces and nephews. A graveside service will be held at Noon, Saturday, March 26, 2022 at Georgia Memorial Park Cemetery in Marietta.

Joyce Maxine Caudell Herren left us for her heavenly home on Friday, March 18, 2022 at Wellstar Cobb Hospital. She was 92 years old and passed after complications following a massive heart attack. Maxine was born on January 30, 1930 on the family... View Obituary & Service Information

The family of Joyce Maxine Herren created this Life Tributes page to make it easy to share your memories.

Joyce Maxine Caudell Herren left us for her heavenly home on...

Send flowers to the Herren family.