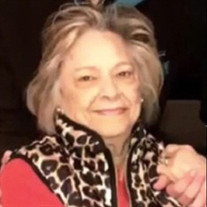 Judy Quattlebaum, 88, of Roswell, Georgia, wife of the late Lawrence M. “Bud” Quattlebaum, III, passed away July 16, 2021. Born in Greenville, SC and raised in Anderson, SC, she was the daughter of the late Thompson Wise Long and Allie Belle Owen Long. She attended Anderson Girls High (1951) and a graduate of Coker College (1955) with a degree in elementary education. She taught 1st grade on St. Simons Island, Georgia where she met her husband of 47 years, Bud Quattlebaum in 1956. Together they had three children, Nancy Lin Quattlebaum, Lawrence M. Quattlebaum, IV and Allison Kay Quattlebaum Orr (Joe Orr) and three grandchildren. She was preceded in death by her husband Bud (2002) and their daughter Nancy (1995). And she is survived by two of her three children, Lawrence M. Quattlebaum, IV, Kay Quattlebaum Orr, her son-in-law Joseph Berry Orr, III and her three grandchildren, Joseph Harrison Orr, Lawrence Christian Orr, and Nancy Ruth Orr. A forever student of the Bible she most enjoyed the study of Jewish law and eschatology. Over her many years as a believer, she shared her love for Jesus with grace and love. She found joy in the details of life that most people over look. She also enjoyed cooking, decorating, sketching, painting murals, flower arranging, sewing anything by hand, needlework, gift wrapping and tying big beautiful bows! Her greatest joys in life aside from her husband and children were her three grandchildren, Harrison, Christian and Nancy Ruth who crowned her with the name “Gimme”. She lived out her last 20+ years living with her daughter’s family and three grandchildren. She was surrounded by them along with her son Lawrence at her death. A live-stream of the service will be available for those unable to attend. In lieu of flowers, please spend time with those you love… “Be kind to one another, compassionate, forgiving each other just as God in Christ also has forgiven you”…Ephesians 4:32

Judy Quattlebaum, 88, of Roswell, Georgia, wife of the late Lawrence M. &#8220;Bud&#8221; Quattlebaum, III, passed away July 16, 2021. Born in Greenville, SC and raised in Anderson, SC, she was the daughter of the late Thompson Wise Long and... View Obituary & Service Information

The family of Judy Quattlebaum created this Life Tributes page to make it easy to share your memories.

Judy Quattlebaum, 88, of Roswell, Georgia, wife of the late Lawrence...

Send flowers to the Quattlebaum family.