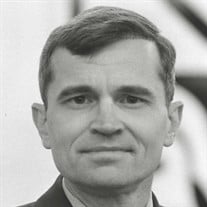 Lt. Col. Karl Harold Wingard, US Army Retired, passed away January 20, 2022. He was 72 years old. He was preceded in death by his parents Sara Constance and Karl Harold Wingard Sr. He is survived by his wife, Lea Wingard and his two sisters, Mrs. Millard Lowry, Jr. and Sara Constance Hamilton, and many other beloved family members to include nephews, a niece, great nieces, step children and step grandchildren. He served his country proudly stationed both in the Continental United States and Europe during his military career. He graduated from Druid Hills High School in Atlanta and received his M. Ed. from Georgia State University. Karl enjoyed country western dancing, fly fishing, reading and cooking. He will be missed tremendously. Karl will be laid to rest at the Georgia National Cemetery during a private service on February 8, 2022. “The voice of Jesus bids the soul “come forth,” And out of darkness into light it comes. A change comes over life; it stretches out In length, in breadth, in height; it stronger grows To clamber up the rugged steeps of truth; It sweeter grows to lose itself in love, It purer grows to link itself with God. Thrice blessed is the man upon whose lot The Triple Light, Religion, Knowledge, Love, Doth shine. Within is light, without is light, And from above the smile of God beams down, Higher and higher still he upward climbs, While from each lofty height he shouts aloud To those who sit in darkness far below, “The morning dawns.” Higher and higher still, And then, in faith sublime, communes with God, And waits the Master’s call to enter in That perfect life, where he shall ever dwell A Son of God, a glorious Child of Light.” - Excerpt from Echoes and Other Poems (1899) by Dr. E.A. Wingard, first pastor of St. Paul’s Evangelical Lutheran Church, Columbia, SC and great great grandfather to Karl The family has asked that in lieu of flowers, donations be made in Karl’s name to – Wheeler High School - Reference JROTC in the memo line Address: Wheeler High School Attn: JROTC/Bookeeper 375 Holt Road NE Marietta, GA 30066

Lt. Col. Karl Harold Wingard, US Army Retired, passed away January 20, 2022. He was 72 years old. He was preceded in death by his parents Sara Constance and Karl Harold Wingard Sr. He is survived by his wife, Lea Wingard and his two sisters,... View Obituary & Service Information

The family of Lt. Col. Karl Harold Wingard created this Life Tributes page to make it easy to share your memories.

Send flowers to the Wingard family.