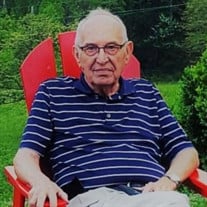 Lindell Eugene DeJarnett, age 93, died quietly at Tranquility Hospice in Marietta, GA on Sept 2nd, secure in Christ’s promise of resurrection. Lindell is survived by his wife of 70 years, Ann Wade DeJarnett, his sons Stan (Kaye) DeJarnett of Madison GA, Doug (Sue) Grove-DeJarnett of Johnson City TN, Jeff (Kibbie) DeJarnett of Marietta GA, and Chris (Kyle Ritter) DeJarnett of Weaverville NC, twelve grandchildren and twelve great-grandchildren. Lindell, the sixth of seven children, was born on June 30, 1928 in Massac County IL to David and Nellie DeJarnett. An avid athlete, musician, and leader among youth at Metropolis First Methodist Church and across the Methodist Conference, Lindell received a Bachelor of Arts from Southern Illinois University before completing a master’s degree in sacred music at Bob Jones University. In addition to his parents, he was preceded in death by his siblings: Raymond (Fern) DeJarnett of Carbondale IL, Arnold (Elizabeth) DeJarnett of Metropolis IL, Omer (Betty) DeJarnett of Louisville KY, Elva DeJarnett of Metropolis IL, Evelyn DeJarnett of Metropolis, and Gene DeJarnett of Kennesaw GA. Lindell began his music ministry at Pattillo United Methodist Church in Decatur, GA, where he served from 1953 – 1964. He and his young family then moved to First United Methodist Church of Marietta GA, where he served as Director of Music for 29 years. During that time, Lindell developed a comprehensive music program to include multiple children’s, youth, young adult, and adult choirs, along with handbell choirs and an orchestra. A tour by the Chapel (youth) Choir in 1965 began a tradition that continued at FUMC for over 50 years. Christmas at FUMC was celebrated by The Singing Christmas Tree, a musical tradition that continued for many years and included children, youth and adult singers and orchestra. Thousands of children, youth and adults experienced great musical and spiritual growth as members of his choirs and orchestras. His life and ministry served as an example of faith, hope and love to all who knew him. His challenge to the members of the Chapel Choir was always “Remember who you are and who you represent.” He and Ann, his partner in life and in ministry, enjoyed a long and fruitful retirement, traveling with friends, and visiting children and grandchildren across the country and in France, where he was likely to end up helping with some major home improvement project while they were there. A Memorial Service will be held at Marietta First United Methodist Church on Sept. 19 at 3:00 pm. Memorial contributions may be designated to the First United Methodist Church Organ Fund.

The family of Lindell Eugene DeJarnett created this Life Tributes page to make it easy to share your memories.

Send flowers to the DeJarnett family.