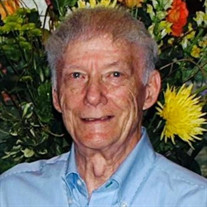 Malcolm Orrin Magaw was born on January 28, 1928 in Eden Valley, Minnesota to Sydney Everett Magaw and Margaret Edith Hatch, both of whom preceded him in death. Malcolm entered eternal rest on September 23, 2021, at the age of 93. He is survived by his loving wife of 63 years, Gene (Martha Eugenia) Durham of Cedartown, Georgia and his two beloved sons, Edward George Magaw (Roxanne) and Everett Wade Magaw (Tricia); four grandchildren: Dana Magaw Kaseta, Everett Wade Magaw II, Charles Malcolm Magaw, and Lindsey Eugenia Magaw; and two great-grandchildren, Addie and Colt Kaseta. In addition, he is survived by one brother, Samuel James Magaw of Wenatchee, Washington. Malcolm was preceded in death by five siblings: Ivan W. Magaw, Iola D. France, Milo E. Magaw, Norma K. Chapman, and Sydney D. Magaw. His life was that of a scholar and educator. Malcolm was valedictorian of the Oregon, Illinois High School class of 1946. His academic pursuits continued though earning a BA in History from Duke University in 1950, where he was a member of the Sigma Phi Epsilon Fraternity. In 1958, he earned an MA in History from Emory University, and ultimately earned his PhD in English from Tulane University in 1964. In the early 1950’s, Malcolm taught at Glynn Academy in Brunswick, Georgia, where he met his future wife. His professorial years began in 1961 as a member of the founding facility at the University of New Orleans, where he taught English for 39 years until his retirement in 1999. Malcolm won the inaugural “Excellence in Teaching Freshman Composition” prize; he also was awarded the “UNO International Alumni Association Award for Excellence in Teaching” twice during his tenure. Malcolm served on several ad hoc committees, perhaps most importantly, the one that selected the final design of the Liberal Arts Building. His administrative positions included nine years as Director of Graduate Studies, as well as appointment to Chairman of the English Department. He was selected to serve on the faculty of the UNO summer abroad programs in both Innsbruck and Prague, and proudly accepted an invitation to be a guest lecturer at Astrakhan State University, Russia. Malcolm was a lifelong sports fan. He loved the New Orleans Saints, his Duke Blue Devils, and more recently, the Atlanta Braves. He was an avid Bridge and Rook player. Malcolm and his wife, Gene, were devoted supporters of the New Orleans and Atlanta Philharmonic Symphonies. Malcolm’s enduring names were Mac, Uncle Mac, or Grand Mac. He was a loving and devoted husband, father, grandfather and great-grandfather. In lieu of flowers, donations may be made to: Prostate Cancer Foundation https://cure.pcf.org/site/Donation American Cancer Society https://donate3.cancer.org/ Easter Seals Society https://secure.easterseals.com/site/Donation

Malcolm Orrin Magaw was born on January 28, 1928 in Eden Valley, Minnesota to Sydney Everett Magaw and Margaret Edith Hatch, both of whom preceded him in death. Malcolm entered eternal rest on September 23, 2021, at the age of 93. He is survived... View Obituary & Service Information

The family of Dr. Malcolm Orrin Magaw created this Life Tributes page to make it easy to share your memories.

Send flowers to the Magaw family.