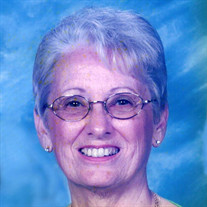 Mary L. Pedoto, 84, of Woodstock, GA passed away on Thursday, September 16, 2021. A Memorial Mass will be held at 11:00 a.m. on Friday, October 8th at Transfiguration Holy Catholic Church in Marietta with a Reception prior to the service from 9:30 – 11:00 a.m. in the Family Life Center. Interment will immediately follow the service at Georgia National Cemetery in Canton, GA at 1:30 p.m. Mary Lou was the youngest daughter of Edward and Matilda Krowe and began her life journey in Hoboken, NJ. She attended St. Cecilia Interparochial High School in Englewood, NJ and graduated in 1955. Mary Lou met and married William Pedoto of Cliffside Park, NJ in 1956 and started their family a year later, ultimately having three children, Frances, William, and Patricia. They moved their family from Cliffside Park to Northvale, NJ in 1966. During their time in Northvale, Mary Lou proudly served as the President of the Northvale Volunteer Ambulance Corp and was one of the first Eucharistic Ministers in St. Anthony’s Parrish. In 1993, they retired to Marietta, GA. Mom and Dad were able to renew their wedding vows on their 50th Anniversary shortly before Dad’s passing in 2007. They were both active members at the local YMCA which served not only as a place to stay fit but as a social setting for a close-knit group of friends that gathered for coffee and to celebrate birthdays and special occasions together. Mom was considered the premier baker of the group and when they knew she was baking, the Y seemed to be at capacity. Along the way, they loved and cherished their six grandchildren and in the past few years, Mary Lou became the proud great grandmother to four beautiful great grandchildren. This would be incomplete if we did not mention Mom’s passionate commitment to her faith as a loyal member of The Transfiguration Holy Catholic Church in Marietta, GA. May she rest in peace. Mrs. Pedoto is survived by her daughter, Frances Gaul and husband, Jim; son, William E. Pedoto and wife, Lisa; daughter, Patricia Jensen and husband, Dave; grandchildren, Jimmy Gaul, Nicole Percelli, Michele Wood, Danica Pedoto, Matthew Jensen, and Billy Pedoto; great-grandchildren, Aiden Wood, Reagen Wood, Domenic Percelli and Noelle Percelli. In lieu of flowers, the family requests contributions be made in loving memory of Mary to St. Jude Children’s Research Hospital, www.stjude.org/donate. Mayes Ward-Dobbins Funeral Home, Historic Marietta Chapel is handling the arrangements. MayesWardDobbins.com 770-428-1511

Mary L. Pedoto, 84, of Woodstock, GA passed away on Thursday, September 16, 2021. A Memorial Mass will be held at 11:00 a.m. on Friday, October 8th at Transfiguration Holy Catholic Church in Marietta with a Reception prior to the service from... View Obituary & Service Information

The family of Mary L. Pedoto created this Life Tributes page to make it easy to share your memories.

Send flowers to the Pedoto family.