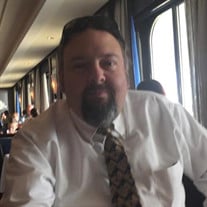 Michael Joseph Christopher, 49 of Kennesaw passed away on Friday, March 6, 2020. A Celebration of Life Service will be held at 1:00 P.M. on Monday, March 9th at Mayes Ward Funeral Home, Historic Marietta Chapel. Michael is survived by his wife, Amy Suzanne Christopher; daughter, LynnMarie Christopher; mother, Linda Cox Christopher; father, Dennis Christopher and his wife, Paula; brothers, Peter Christopher, Tim Christopher and his wife, Mery. He is also survived by several nieces, nephews, aunts, uncles and extended family. Michael Christopher was born on Fort Meade and lived in Pennsylvania, Ga. and Fl. He was a quick-witted man with a great sense of humor. His love of God was obvious as was his devotion to his wife and LynnMarie. Throughout his life he was part of the Parrotheads of Central Florida and even managed to take his wife to a couple of Jimmy Buffet concerts! He married Amy in 2001 and worked for Family Christian stores. His passions included trivia of any type, Jeopardy, 80s and 90s music, and got his love of animals, especially cats from his mom. He loved musicals and got emotional every time He saw Les Misérables. But Wicked was his favorite. If you were to ask him about his best adventure, he would say the great adventure of adoption. God orchestrated events in an unimaginable way for he and Amy to get the perfect daughter. She made him a daddy and adoption gave him a church home and more support than he could think of. He loved his family fiercely. He loved to brag to the world their accomplishments. He also loved to share about his wife’s work as a pediatric nurse and LynnMaries adventures at church serving with her mom and at school. He never got tired of telling people he and his wife shared the same birthday. Michael and his wife love to travel, specifically cruising. They, along with LynnMarie recently took a Disney cruise as a family and had a magical time. He was a lover of music and loved meeting artists and collecting autographs. During his time at Family Christian he made his wife’s dream come by arranging a meet and greet with Stephen Curtis Chapman. He loves movies and worked at Blockbuster for many years. Because of this he collected tons of movies and introduced his wife to many such as the Pirate Movie! Michael deeply respected our military and police and firefighters. He often teared up when watching move that included them. He rarely met a stranger and if he ever sold you a car, you were his friend for life. He loved playing poker with friends and tried to play regularly. He also played trivia and he and his wife made many friends this way through the years. He was very proud of his Greek heritage and never turned down spanakopita if offered. He would also tell you Greek Easter at Uncle Jerry’s was one of his favorite days other than March 16, the day he and his wife and LynnMarie became a family of three! He loved to tell people of his fathers involvement in the Greek church. Michael would often speak in movie quotes. In fact, “Jobu needs a refill” was often his trivia team name. If you knew that line, you were an instant friend. Jeopardy was scheduled into his day. He could answer about 95% of the questions and often shared the information with his mom. He loved his family. He loved his wife and daughter. While his wife worked nights, he introduced his daughter to a lot of old movies and games. He loved to share memories with her and teach her every random fact there is. He made sure his wife got a foot massage every holiday because of her occupation. He was resourceful and intentional with gifts. He loved to surprise his wife at work and when he worked at Chick Fil A, he would often bring ice cream to his wife and coworkers. His joy will be missed. Michael had an unexplainable light and you could see it in his beautiful eyes. He was a Christian and would tell you that it was more than just believing in Jesus. A relationship was the basis of his faith. He didn’t like the word religious but talked about his relationship with God! 2 Timothy 4:7 “I have fought the good fight. I have finished the race. I have remained faithful.” Michael is gone but treasured. We know he is at peace and fought the good fight. “Because I knew you, I have been changed for good”. Wicked The Family will receive friends from 12:00 P.M. till 1:00 P.M. on the day of the service. Flowers are appreciated or you may contribute to Swallows Nest Children’s Home at swallowsnestzz.org or Brighton Their World at brightontheirworld.org/donate

Michael Joseph Christopher, 49 of Kennesaw passed away on Friday, March 6, 2020. A Celebration of Life Service will be held at 1:00 P.M. on Monday, March 9th at Mayes Ward Funeral Home, Historic Marietta Chapel. Michael is survived by his... View Obituary & Service Information

The family of Michael Joseph Christopher created this Life Tributes page to make it easy to share your memories.

Michael Joseph Christopher, 49 of Kennesaw passed away on Friday,...

Send flowers to the Christopher family.