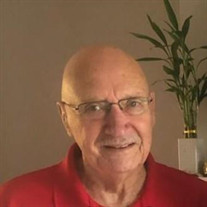 Michael Lamar Johnson was born to Ralph and Blanche Johnson on April 7th, 1941 in Marietta, GA. He was the oldest of 5 children that grew up together on their farm on Stanley Road. He was always the loving “big brother”, protected his sisters, and always had their backs throughout their lives. He had a special bond with his daddy, working closely with him and after losing him at a young age he became a constant help to his mother. He attended Sprayberry High School and after graduation he attended night classes at Georgia Tech. He married early in his life and had 3 children, Cathy, Michelle, and Michael Jr. He joined the electrical IBEW Local Union 613 where he was recently awarded his 60 year pin for his service and set a career path that many family members and three generations would follow. He lived in Cobb County Georgia until moving and building a farmhouse in Good Hope, GA in the early 80s where many family memories were made. From fishing, to hunting, to gardening and raising cattle the work was always there to do and Michael was good at it all. He was the last of a generation who caught, hunted and grew the food they ate. He lived a simple yet not always easy life. Life before iPhones and social media. While living on the farm, you could always find Michael in his overalls and on his tractors. He made the best breakfast pancakes and hosted family fish frys. He remarried to Linda Johnson in 1992 where their family continued to grow and eventually became 4 children, 11 grandchildren and 9 great grandchildren. After retirement, Micheal and Linda traveled all over the country. He wasn’t into flying so they drove most places. They made many trips to St. Simons as well as Alaska, Grand Canyon, West Virginia, Key West FL, Hawaii along many other cities across the country and several cruises. They often made these trips with his siblings. When not traveling for vacation, you could always find him in the crowds cheering his grandchildren on at whatever activities they were involved in. From softball to baseball to wrestling and cheerleading, and band and choir concerts he showed his love and support. He and Linda moved to Ballground, GA in 2006 and he was introduced to the world of mountain feist squirrel dogs and he fell head over heels in love with these dogs. His first dog was Princess and she was treated as nothing less than royalty. She went on to have a full litter and Mike loved them all caring for his dogs just like family. Anyone who loved babies and dogs as much as Mike did, had to be a special person, and that he was. He is survived by his wife Linda Johnson, children Cathy (Chirs) Janusek, MIchelle (Johnny) Fitzpatrick, Michael (Monica) Johnson Jr and Eddie (Julia Anne) Lower. Grandchildren Chris (Megan) Lower, Jamie (Matt) Jones, Ashton Rivers, Michael Janusek, Daniel (Jess) Fitzpatrick, Kylie (Tanner) Ray, Miles Johnson, Marjorie Johnson, Marshall Johnson, Dalton Lower, and Mallory Lower and his 9 great grandchildren and numerous nieces and nephews. Siblings Beverly Clark, Gail (Joe) Kitchens, Charlie (Joan) Johnson and sister in law Sally Johnson. He is preceded in death by his parents Ralph and Blanche Johnson, brother Clark Johnson and many other loved ones. Visitation and Services will both be held at Mayes Ward Funeral Home in Marietta on Saturday 3/12. Visitation will be from 1:00-2:00pm and service will be held at 2:00 followed by a graveside service at New Salem Baptist Church Cemetery. In lieu of flowers, the family is asking for donations to the New Salem Baptist Church Cemetery Fund by mail to 836 New Salem Rd NW Kennesaw, GA 30152 or online at https://newsalem.org/give/ .

Michael Lamar Johnson was born to Ralph and Blanche Johnson on April 7th, 1941 in Marietta, GA. He was the oldest of 5 children that grew up together on their farm on Stanley Road. He was always the loving &#8220;big brother&#8221;, protected... View Obituary & Service Information

The family of Michael Lamar Johnson SR created this Life Tributes page to make it easy to share your memories.

Michael Lamar Johnson was born to Ralph and Blanche Johnson on...

Send flowers to the Johnson family.