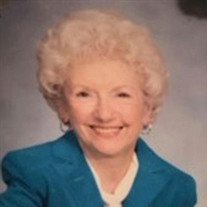 Myrtle Frances Fain Matthews, 99 years old, passed away peacefully on Saturday, September 19, 2020 at her home in Marietta, GA. Myrtle was born in Plum City, Alabama on January 11, 1921 to Jennie and Macon Fain. She was the third of four children and a child of the Depression. She learned to work very hard when she was just a child and that was a quality she never lost. She graduated from Anniston High School and then went to work for Southern Bell. On October 26, 1940 she married Charles William Matthews (C.W.) and shortly thereafter moved to Marietta, GA where she resumed her job with Southern Bell. At that time, C.W. worked grading the site for Bell Bomber (now Lockheed). C.W. was deployed to the South Pacific in 1943, and Myrtle returned to Anniston, AL where she lived with C.W.’s parents, worked and helped raise their first son. When the war ended in 1945, C.W. returned home and he with Myrtle moved the family and C.W.’s aging parents to Marietta, GA. Using his Army background, C.W. and Myrtle started C.W. Matthews Contracting Company with seven employees with Myrtle as the secretary and bookkeeper. At the same time, she worked as a teller at Cobb Exchange Bank and raised a family of two challenging boys. She threw herself in the activities and worship at Roswell Street Baptist Church for many years. Myrtle was a great cook and would often show up at a neighbor or friend’s house with a fresh baked pound cake or a banana pudding. They often entertained large groups of friends at their home on Dallas Highway. They also had a home on Lake Burton and they never went without an entourage with Myrtle directing every detail. She didn’t miss a beat! She was an avid fisherman and her goal was to catch a bigger fish than C.W. Myrtle loved rides on Lake Burton, Halloween visits from great grandkids, and a good garage sale. She cherished her family and her Lord. She was strong in heart and body, and humble to the core. Myrtle was preceded in death by her husband, C.W. Matthews; one sister, Louise Fain Kenyon; one brother, Robert Fain; one grandson, Travis William Matthews; and one great-grandson, Levi Mayes Burton. She is survived by one sister, Mary Tom Fain Stubbs of Birmingham; two sons, Robert Edward Matthews (Dianne) of Marietta, GA, Samuel Charles Matthews (Crystal) of Panama City, FL; three grandchildren, Charles Edward Matthews and Mary Matthews Burton (Matt) both of Kennesaw, GA, Kimblaine Faith Matthews of Marietta, GA; seven great-grandchildren, Michael Scott Matthews (Anna Grace), Katherine Dawn Matthews, Luke Doran Burton, Mary Grace Burton, William Robert Burton, Esther Elizabeth Burton and Lydia Dianne Burton, all of Kennesaw, GA; and several nieces and nephews. The family will have a private burial. A service of Worship and Remembrance will be held on Wednesday, September 23, 2020 at 4:00 p.m. at Midway Presbyterian Church, 4635 Dallas Highway, Powder Springs, GA 30127. Reverend David Hall and Dr. Nelson Price will officiate. The family requests everyone wear a mask and adhere to social distancing guidelines. The family requests in lieu of flowers, gifts may be given to Samaritan’s Purse, 801 Bamboo Road, Boone, NC 28607 or Calvary Children’s Home, 1430 Lost Mountain Road, Powder Springs, GA 30127. Mayes Ward-Dobbins Funeral Home in Marietta is handling the arrangements. www.mayeswarddobbins.com 770-428-1511

Myrtle Frances Fain Matthews, 99 years old, passed away peacefully on Saturday, September 19, 2020 at her home in Marietta, GA. Myrtle was born in Plum City, Alabama on January 11, 1921 to Jennie and Macon Fain. She was the third of four children... View Obituary & Service Information

The family of Myrtle Frances Fain Matthews created this Life Tributes page to make it easy to share your memories.

Send flowers to the Matthews family.