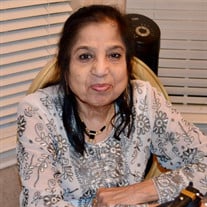 Padma Thakkar aka Wonder Woman Padma Surendra Thakkar of Chicago, Illinois passed away peacefully in her sleep in Atlanta with her daughter, Anisa Daftari at her bedside, on March 31, 2020 at the young age of 72. Padma Thakkar was predeceased by her husband, Surendra Thakkar and her parents, Maneklal and Savitaben Thakkar. She is survived by her daughter and son-in-law, Anisa and Dr. Tapan Daftari, respectively; her son and daughter-in-law, Shobhan Thakkar and Rashmi Rampuria, respectively. She was part of big family that included: her late brother and sister-in-law, Mahesh and Prabha Thakkar, respectively; her sister and late brother-in-law, Usha and Prahlad Thakkar, respectively; her late brother and late sister-in-law, Hasmukh and Jayshree Thakkar, respectively; her sister and brother-in-law, Bhavna and Kirit Thakkar, respectively; and her brother-in-law and sister-in-law, Ashwin and Gita Thakkar, respectively. She is also survived by her four grandchildren, Shivam, Manav, Avi and Surene and many nieces and nephews, all of whom she loved dearly. Padma Thakkar was born on November 10, 1947 in Ahmedabad, Gujarat to Maneklal and Savitaben Thakkar. She was the eldest of 5 brothers and sisters. She married Surendra Thakkar in 1966. After moving to the United States in 1967, she continued to be the support for not only her husband, but numerous family members who were immigrating to the United States.. Over the next ten years, the couple welcomed two beautiful children into their home. They also sponsored many family members who immigrated to the United States from India, and not only helped them to settle into a new country, but did so by creating a welcoming and loving environment. Padma not only made and served homemade meals, but provided a sense of stability and comfort for those that left all of their family and friends back home. Together, Padma and Surendra are directly and indirectly responsible for over 800 Lohana Samaj members being in the Chicagoland area. Her children and grandchildren remember her as an extremely kind, loving, warm and generous woman who would welcome everyone she could into her home. She was most well known for her wonderful cooking and dinner parties that will be missed by so many. Padma Thakkar moved around the US with her husband, living in cities such as Chicago, Pittsburg, Knoxville, Chattanooga, Fort Worth, Charlotte, Kennewick, and Augusta. Throughout her journeys, she worked while always being the support of her children and husband. When she wasn’t a homemaker, she worked in management at various banks and eventually owned her own business (Dunkin Donuts) for over 10 years. Everywhere she went, she rose to higher positions through her dedication and hard work. Despite her long work hours, she was always devoted to making sure her family members were always well taken care of. This was no small task, as her extended family grew to more than a few hundred. She was an active and dedicated member of the Lohana Samaj and the Shree Jalaram Mandir and was very well-known by many members of the Chicago community. She had also made a new home in Atlanta for the last few years and been loved by all of her friends there as well. Due to the current COVID-19 virus effecting the lives of everyone, the family will not be able to accept any flowers, though very much appreciated. In lieu of flowers, if you wish, please send donations to A School Bell Rings (www.aschoolbellrings.org) or Pratham (https://prathamusa.org). Unfortunately, due to the COVID-19 restrictions, only immediate family in Atlanta will be able to pay their respects in-person at a private memorial service this Saturday, April 4, 2020 at 11am EST. Anyone wishing to join in the service may join the live stream at https://www.mayeswarddobbins.com/obituaries/Padma-Thakkar/#!/Obituary. The family will hold a larger in-person service for family & friends when time permits for anyone wishing to pay their respects and celebrate the life of our beloved Padma Thakkar.

Padma Thakkar aka Wonder Woman Padma Surendra Thakkar of Chicago, Illinois passed away peacefully in her sleep in Atlanta with her daughter, Anisa Daftari at her bedside, on March 31, 2020 at the young age of 72. Padma Thakkar was predeceased... View Obituary & Service Information

The family of Padma S Thakkar created this Life Tributes page to make it easy to share your memories.

Send flowers to the Thakkar family.