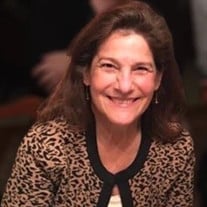 Patricia (Patty) Mary Delano of Marietta, Georgia, passed away on May 31st after a courageous fight with leukemia. Patty was born in Troy, New York, on January 4, 1956. She graduated from Hoosic Valley Central School in Schaghticoke, New York, and received a bachelor’s degree from State University of New York at Oneonta and a Master of Business Administration from Rensselaer Polytechnic Institute – The Lally School of Management. She was a loyal and dedicated employee of General Electric (GE) for thirty years. Her most recent position was Senior Sales Operations Manager for GE Renewable Energy, after several years in the GE Gas Power organization. Patty’s inquisitiveness and sincere interest in people, and truly getting to know them, along with her work ethic and her ability to focus on getting things done became the framework of her career, activities, and accomplishments. She moved to Marietta in 2002 and quickly became an active and caring member of the local community. She loved to garden and planted a raised bed at a local community garden. If it was Saturday, you would find her at the Marietta Farmers Market, where she knew many of the vendors by first name. Early mornings included a stop at Cool Beans, where she was part of a daily coffee klatch. The time she spent establishing greenspace at the Crest Hill Cemetery in Marietta became instrumental in its safekeeping. Patty enjoyed traveling. In her roles at GE, she was fortunate to travel to and live in Europe several times, including London, Munich, Italy, and Prague. She particularly loved visiting Paris. Patty was caring and warm, environmentally conscious, a great cook (especially soups and bone broth), with a great sense of humor and a keen sense of fashion. Her contagious laughter and easy smile brought joy to those who knew her. Patty is survived by her sister Barbara Delano (Craig Miller), brother John Delano (Susan Delano), brother David Delano (Patti Delano), nephew Kevin Delano, nieces Annie Delano, Alexandra Miller, Jenna Delano, and Kayla Delano. She is predeceased by her parents, Louis J. Delano and Sophie Mary Bunk Delano. Her family misses her tremendously. Patty was cremated and no services are planned at this time. The family thanks Mayes Ward-Dobbins Funeral Home for their caring guidance and welcomes the sharing of memories at www.rememberingPatriciaDelano.com . Donations to the Leukemia & Lymphoma Society are also welcome. https://donate.lls.org/lls/donate

Patricia (Patty) Mary Delano of Marietta, Georgia, passed away on May 31st after a courageous fight with leukemia. Patty was born in Troy, New York, on January 4, 1956. She graduated from Hoosic Valley Central School in Schaghticoke, New York,... View Obituary & Service Information

The family of Patricia (Patty) Mary Delano created this Life Tributes page to make it easy to share your memories.

Send flowers to the Delano family.