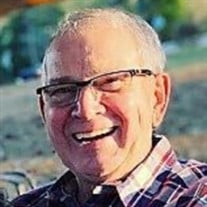 Paul Richard Collins, 75, of Powder Springs, GA passed away peacefully on Saturday, January 2, 2021 at his home with his loving wife by his side. There are no services planned at this time. Richard met the love of his life, Susanne in 1966. They were married for 54 years and raised one child, Brooke. He obtained a degree in Pharmaceuticals and worked as a Pharmacist for 45 years, retiring from Rite Aide Pharmacy’s in 2014. Richard & Susanne have been members of Powder Springs First United Methodist Church for over 40 years, where he was a key volunteer for the summer lunch program. Richard also attended bible study classes at McEachern United Methodist Church. Born March 1, 1945, Richard was one of four children to Paul and Minnie Lee Collins of Lithia Spring, GA. Richard is preceded in death by his parents and sister, Mary Cole and brother Charles E. Collins. He is survived by his wife Susanne Collins of Powder Springs, GA; daughter Brooke Cowen (Richard Freeman) of Marietta, GA. brother, Jimmy Collins (Chloe) of Powder Springs, GA; grandchildren, Levi & Reanna of Marietta, GA; and his caregiver, Jeff Fuller. Also known as Pop, Richard’s best days were spent pushing a tire swing or riding a bike with his grandchildren Levi (12) and Reanna (6). He also enjoyed hiking and camping and working in the yard. Richard was a fan of all sports, but he particularly enjoyed watching the Atlanta Braves. A gentle caring soul, Richard always put his family first and made sure his family was taken care of. He was a devoted husband, father, and grandfather. His quiet yet strong presence will be greatly missed. In lieu of flowers, donations can be made in Richard’s name to Powder Spring First UMC 4329 Marietta Street, Powder Springs, GA 30127; McKenna Farms 3044 Due West Road Dallas, GA 30157 or MUST Summer Lunch Program mustministries.org/summer-lunch ------------------------------------ Arrangements made under the caring guidance of Mayes Ward-Dobbins Funeral Home www.mayeswarddobbins.com 770-943-1511

Paul Richard Collins, 75, of Powder Springs, GA passed away peacefully on Saturday, January 2, 2021 at his home with his loving wife by his side. There are no services planned at this time. Richard met the love of his life, Susanne in 1966.... View Obituary & Service Information

The family of Paul Richard Collins created this Life Tributes page to make it easy to share your memories.

Send flowers to the Collins family.