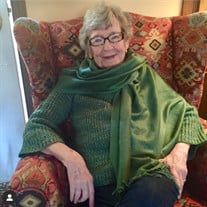 Peggy Barker Chesney, 91, daughter of the late Myrtle Cook Barker and George Washington Barker and beloved wife of 61 years to the late Herman O. Chesney, died Thursday, December 3, 2020 in Marietta, Georgia. Mrs. Chesney was a native of Spartanburg County, South Carolina and decades-long resident of Marietta, Georgia after living in Rock Hill, South Carolina; New Orleans, Louisiana; Chicago, Illinois; Albuquerque, New Mexico; Bennettsville, South Carolina; Columbia, South Carolina; Decatur, Georgia; and Dalton, Georgia. She attended Winthrop University and Tulane University School of Social Work, earning Bachelor’s and Master’s degrees, respectively. She served as a children’s case worker for several years and last worked for the Children Services Division of the City of Chicago. After her children were born, Mrs. Chesney became a lifetime volunteer, particularly in support of children. She was a founding member and night operator for Can Help in Dalton, Georgia, a group that established an emergency 24-hour help line for area residents. She continued to care for children throughout her life by serving as a Court Appointed Special Advocate in the Juvenile Court of Cobb County making recommendations to the court for the best interests of abused and neglected children in dependency proceedings and serving as a board member and volunteer for Club 3:30 at First Presbyterian Church Marietta, an after school program in which children receive love and support instead of going home to an empty house. Mrs. Chesney, a longtime Presbyterian, served her faith well through the years first as a deacon at Immanuel Presbyterian Church in Albuquerque, New Mexico when she was a young woman and subsequently as an active member, a church committees participant, and a Sunday School teacher at Presbyterian churches wherever she lived, including her cherished First Presbyterian Church of Marietta. Mrs. Chesney is survived by her loving family, sons: Stephen Chesney (Tris), Mark Chesney, and Peter Chesney (Jana) and grandchildren: Jake, Rachel, Will, Phillip, Ella, David, and Ada. She is preceded in death by her devoted husband, Herm. A memorial service is not planned at this time. Memorial offerings may be made to Club 3:30 at First Presbyterian Church of Marietta.

The family of Peggy Barker Chesney created this Life Tributes page to make it easy to share your memories.

Send flowers to the Chesney family.