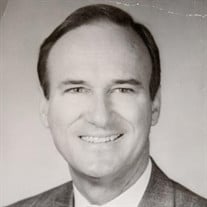 Reverend Phillip Owens, 76, died June 14th after a lengthy illness with his wife, Judy, lovingly caring for him for several years and by his side at the end. Phil was born on September 21, 1944 in Atlanta, Georgia. Phil is survived by his loving wife of 35 years, Judy Boston Owens, his daughter Jennifer Kay Owens, (Chase), of Overland Park, Kansas (daughter of Anna Blackstock Hall), his sister, Kay Owens Fitchpatrick of St. Petersburg, Florida, grandchildren Julian and Jameson Peeples, and nieces and nephews. Preceded in death by his parents, Vera Ann Spinks Owens and Julian Anderson Owens, and his brother, Perry Joel Owens Phil graduated from Brown High School in Atlanta, Georgia in 1962 and received his B.B.A. degree from Georgia State University in 1966 and Southern Baptist Theological Seminary in Louisville, Kentucky where he graduated in 1971. While attending high school and college, Phil was an avid athlete. He loved playing baseball! He served his country in the U.S. Coast Guard – 6 months active, 6 years in U.S. Coast Guard Reserve. Phil’s career consisted of Salvation Army from 1973 to 1979 as Chaplain and clinical coordinator; Wellstar Kennestone Hospital from 1979 to 2012 as Assistant Chaplain in patient care; and then in 1999 became the Director of Pastoral Care at the Wellstar Hospitals where he retired in 2012. He was a Counsellor at First Baptist Church in Powder Springs, Ga for approximately 20 years. While at Wellstar, Phil worked with Hospice care and with the volunteers at Wellstar, he held many seminars and retreats at his cabin on Allatoona Lake. He was an avid runner, always running in the Peachtree Road races for many years. He enjoyed teaching aerobics where he met his wife, Judy. He loved boating at Lake Allatoona. He started interfaith monthly meetings among Muslims, Baha’is, Sikhs and Protestants to share thoughts on religion in the community. Phil and his wife, Judy, were members of First Baptist Church of Marietta for many years and were in Gary Bonds Sunday School class. Phil was a community leader in Cobb County being a very active member of Marietta Kiwanis Club from 1999 until 2015 where he made many friends. He served on the Board of the Kiwanis Club and while there as a member he received the Hixson award in 2001. While in the Kiwanis Club, Phil started the Easter Sunrise Services held at Kennesaw Mountain each year. He also started bellringing for the Salvation Army and to this day the members of the Kiwanis Club sign up to ring the bells to collect money for the children in the community. Phil loved the Salvation Army. He was on the Advisory Board for the Salvation Army for many years. He was a member of Leadership Cobb, Class of 2002; the Cobb County Chamber selected Phil to become a member of the Honorary Commanders Association in 2012; Phil was part of Cobb Prayer Breakfast for many years. Phil has married so many couples in Cobb County and nearby and did funeral services for many families of loved ones who had passed. He also counseled couples with stillborn deaths. He would baptize their babies in a bathtub at the hospital. Everyone who knew Phil remembers how he would look at them and make them feel so special His eyes and his mannerisms were so sincere and everyone felt so cared for by him and will remember him as a fabulous listener, a gifted speaker, a compassionate soul, admired, loved, dedicated, blessed with God-given talent and always ready and willing to serve others. His family would like to thank the caregivers and staff at Camellia Place in Woodstock for taking care of Phil these past 2 years. Also, thankful for Capstone Hospice who did so much for the family near the end of his life. Donations can be made in honor of Phil to the Alzheimer’s Association at www.alz.org. Judy would like to thank Jennifer (Phil’s daughter); caregivers, staff and residents of Camellia Place in Woodstock, GA for taking care of Phil these past 2 years; and Capstone Hospice for these past few weeks. They were all so good to Phil. A memorial service will be held 3:00 PM Sunday, June 20th at the chapel of Mayes Ward-Dobbins Funeral Home in Marietta.

Reverend Phillip Owens, 76, died June 14th after a lengthy illness with his wife, Judy, lovingly caring for him for several years and by his side at the end. Phil was born on September 21, 1944 in Atlanta, Georgia. Phil is survived by his... View Obituary & Service Information

The family of Rev. Phillip Matthew Owens created this Life Tributes page to make it easy to share your memories.

Send flowers to the Owens family.