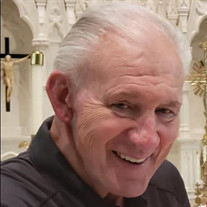 On Tuesday, April 12th, 2022, heaven gained an incredible soul when Raymond Rissmiller went to his eternal home. Ray was born July 22, 1942 in Easton, Pennsylvania. After graduating from Easton HS he migrated south to attend the University of Georgia and play football for his beloved bulldogs. He was awarded many honors for his on-field performance. His senior year he was named an All American under the first-year coach Vince Dooley. In 1964 he was drafted by the Philadelphia Eagles. The following year he was traded to the newly formed expansion team, New Orleans Saints. He went on to play 6 years in the NFL. After retiring from football, he worked over 30 years in the soft drink industry. Ray loved football and golf, but more than anything he loved family. In 1967 Ray married Dianna Clark and they were blessed with 2 beautiful children. For 9 years, Dianna fought a courageous battle against cancer, but sadly passed away in 1991. Ray remarried in 1992 to Carole Ann Rodgers. They resided in the Charleston area for 20+ years before relocating to Marietta in 2021. Ray had a huge heart and they only thing he loved more than family was Jesus. He served with Gideons for over 10 years, constantly wanting to share the word with those he came in contact with. He also served as a deacon, taught Sunday School and sang in the annual Singing Christmas Tree at Summerville Baptist Church. Ray was preceded in death by his parents, Raymond Rissmiller Sr. and Dorothy Loumeyer Rissmiller, and sister Peggy Ann Rissmiller Lee. He is survived by his devoted wife, of 30 years, Carole Ann Rodgers Rissmiller. Also surviving, son Scott Rissmiller & his wife Sonya (Charlotte, NC), daughter Shawn Dee Rissmiller Sharrett & husband Brandon (Charleston, SC), stepdaughters Robin Rodgers Mize & husband Nathan (Smyrna, GA), Shannon Rodgers Wisener (Providence, RI) and Mickelle Rodgers Rodriguez & husband Tim (Washington D.C.). He was blessed beyond measure with 12 grandchildren and 2 great grandchildren (with 2 more coming soon). Also survived by his brother Richie Rissmiller & wife Flora (Moorestown, PA). If desired, in lieu of flowers the family has asked donations to be made in Ray’s memory to Gideons International, P.O. Box 943, Summerville, SC 29484.

On Tuesday, April 12th, 2022, heaven gained an incredible soul when Raymond Rissmiller went to his eternal home. Ray was born July 22, 1942 in Easton, Pennsylvania. After graduating from Easton HS he migrated south to attend the University... View Obituary & Service Information

The family of Ray Rissmiller created this Life Tributes page to make it easy to share your memories.

Send flowers to the Rissmiller family.