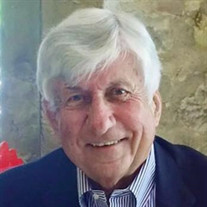 Raymond Valeika passed away peacefully at home on July 10, 2021. Ray was born in Kaunas, Lithuania, in 1942 to Florijonas and Ann Valeika. His father was a noted composer and conductor of the Lithuanian Military orchestra who, as a young man, had played flute in the private orchestra of the mother of Nicholas Romanov, the last Czar of Russia. Florijonas fought for the Russian Army in World War I but deserted when the Red Army attempted to conscript him to fight in the Russian Revolution. When the Soviets took Lithuania in 1944, Florijonas’s ties to the previous regime and his refusal to fight for the Revolution made him a marked man. The Valeika family, including a three-year-old Ray and an infant brother, fled under cover of darkness in a horse-drawn cart. They had to cross Soviet-occupied Eastern Europe, hiding in barns and basements, until they made it to Allied-occupied Bavaria. Ray’s baby brother did not survive the journey. Ray’s family was randomly assigned to an American-run Displaced Person’s camp, where they would spend the next six years. Despite the hardships he endured, Ray always described this time as an idyllic childhood, playing in ruined castles and shot-down airplanes in the Bavarian forests. His sister, Ramona, was born during their time in Germany. At age nine, Ray’s family was able to emigrate to the United States through the sponsorship of a Catholic charity. The Valeikas settled in East Saint Louis, Illinois. Again, despite growing up in difficult conditions, Ray always spoke fondly of his childhood as an immigrant playing with kids from many different backgrounds. He excelled at sports and earned a basketball scholarship to St. Joseph’s College in Indiana. During his freshman year, his parents passed away within six months of each other, and Ray had to return home to care for his sister. A life-changing stroke of luck occurred when a Dean at Saint Louis University heard about his circumstances and offered him a full scholarship. He enrolled at SLU’s Parks College of Engineering, Aviation and Technology, setting him on his lifelong path in the Aviation Industry, where he got to travel the world, one of his greatest passions. Ray worked for several airlines for the next 40 years including Eastern, Pan Am, Continental, and Delta, where he retired as Senior Vice President of Technical Operations in 2004. At that time, he oversaw a maintenance organization with over 10,000 employees and was responsible for a fleet of 700 aircraft. His office was in the hangar, and he constantly walked the floor to maintain personal relationships with employees at all levels, earning him the nickname, “The Wrench.” He received many accolades in the industry, including the Air Transport Association Nuts and Bolts award in 1996. He was an internationally recognized leader and innovator in the world of airline maintenance and technical operations. He served on several boards including those of NASA and the National Academy of Sciences, and served on the Executive Board of ATL Partners until his death. He met his beloved wife Tyra, a flight attendant for Eastern, on an airplane. They were married from 1967 until her death in 2018. Along the way they had two children, Cheryl, and Steven. Ray was a phenomenal father, treasuring family time despite a busy career. He brought his kids on trips around the world, instilling in them the same love of travel, different places, and different people that he always had. Ray’s experience as a refugee and an immigrant and his realization of the American Dream would define his personality and worldview. He paid forward the kindness he received early on in his philanthropic work. The most notable example was his work with the Community Mayor’s Association of New York where he organized an annual “flight to the North Pole” for disabled children. The children boarded a Pan Am plane that would taxi out to the runway, pretend to takeoff, and then return to a hangar decorated like the North Pole, complete with Santa and presents. He brought this tradition with him to Continental and Delta. Ray made friends very easily and in great numbers. In fact, he would run into friends and acquaintances in distant airports and cities with such frequency that it became a running joke in the family anytime they traveled, wondering when the next random encounter with an old friend would occur. He also felt a kinship with other immigrants and would often ask people where they were from if he heard an accent. Ray was a great father, husband, grandfather, and friend to many. He had a tremendous work ethic and an even greater love of life which was evident to anyone who knew him. He is survived by his daughter Cheryl Stenz and her children Charlotte, Will, and Jack, and son Steve and his wife Katie and their daughters Lillian and Vivian, as well as his niece Sandra Myatt and nephew Jim Alvey. He is preceded in death by his parents, sister, brother, two half-brothers, his wife Tyra, and son-in-law Chris Stenz. A service will be held at 10 a.m., Thursday, July 22, at St. Joseph’s Catholic Church in Marietta, with a reception to follow at Governors Towne Club in Acworth. Masks are required for nonvaccinated guests. In lieu of flowers, donations may be made to the Community Mayor’s Association of New York. Arrangements made under the caring guidance of Mayes Ward-Dobbins Funeral Home & Crematory Macland Chapel, Powder Springs, GA.

Raymond Valeika passed away peacefully at home on July 10, 2021. Ray was born in Kaunas, Lithuania, in 1942 to Florijonas and Ann Valeika. His father was a noted composer and conductor of the Lithuanian Military orchestra who, as a young man,... View Obituary & Service Information

The family of Raymond "Ray" Valeika created this Life Tributes page to make it easy to share your memories.

Send flowers to the Valeika family.