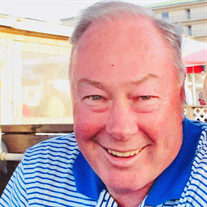 Richard Andre (Rick) Countryman, of Marietta, Georgia passed away peacefully on Wednesday, June 2, 2021, and is now in the arms of our Heavenly Father. Rick was born on September 22, 1946 in Gadsden, Alabama to Dewey and Rita Countryman. He graduated from Gadsden High School in 1964 and received his B.S. in Textile Management from Auburn University in 1969. He then went on to earn his Masters Degree in Chemistry from Georgia Tech in 1971. During and after college he served 6 years in the National Guard. He had a long career in textile sales and management before retiring in 2011. Rick was a long-time member of First Baptist Church of Marietta and the Gary Bonds Sunday School Class. Rick was an avid Auburn fan who loved Auburn sports like no other. He was an outstanding athlete, playing both baseball and basketball during his youth. He was the center fielder on the Auburn University baseball team that won the SEC Championship in 1967 and went to the College World Series finishing 4th in the Nation; he earned All-SEC honors in 1967 while leading the SEC in hitting with a .407 batting average. In addition to sports, Rick had a love for music and was a wonderful trumpet player. He played in the marching band at Gadsden High School and went on to help form a band, The Tyn Tymes, while he was at Auburn University The band has performed at many major events such as special guest artists at the Cammy Awards, Auburn Football games, and the 60th birthday party for Archie Manning. Rick was preceded in death by his parents, Dewey L. and Rita S. Countryman; brother-in-law, Stewart Jacobs. He is survived by his wife of 52 years, Jane Anne Countryman; son Taylor (Melissa) Countryman, daughter Leigh Anne (Dann) Bohacek, sister, Joni Countryman Smith. He is also survived by five adoring grandchildren; Jacob and Anna Kathryn Bohacek, Addison, Aubrey, and Annastewart Countryman; nieces, Emily (Jonah) Riley, Jennifer (Dan) Theobald; nephew, David Jacobs; uncle Jerry (Elna) Countryman; cousins Danny (Mary Ann) Clayton, Randy Countryman, and Greg Countryman. He is also survived by several great nieces and nephews. Rick was a wonderful man, husband, father, Pappy, friend, athlete, musician, and an incredible griller and chef. He loved spending time at the family’s lake house on Lake Weiss and taking trips to the beach with family and friends. He made everyone feel like family and loved to entertain guests. He loved his Sigma Nu brothers and cherished all the great memories they’ve had together over the years. He will be greatly missed, but we have comfort knowing God rejoices having him home in Heaven and that he doesn’t have to endure any more pain. The family would like to thank all the Doctors, Nurses and other Medical professionals that have helped take care of him over the last few years. We want to give a special thank you to Dr. Indira Chervu and his caregiver over the last year, Mr. Tim Burke. A memorial service and celebration of life will be held in the Chapel at First Baptist Church of Marietta, Marietta, Georgia on Saturday, June 12 at 2:00 P.M with visitation beginning at 12:30 P.M in the Chapel. Additional parking is available next door at Mayes Ward-Dobbins Funeral Home. In lieu of flowers, please consider making memorial contributions to Tigers Unlimited Baseball using the following link: https://alumniq.auburn.edu/giving/to/athletics (Choose Tigers Unlimited Baseball then select in memory of Rick Countryman), mail a check to Tigers Unlimited Attn. Jon Wilson P.O. Box 351 Auburn, AL 36831, or a donation to First Baptist Church of Marietta in honor of Rick Countryman.

Richard Andre (Rick) Countryman, of Marietta, Georgia passed away peacefully on Wednesday, June 2, 2021, and is now in the arms of our Heavenly Father. Rick was born on September 22, 1946 in Gadsden, Alabama to Dewey and Rita Countryman.... View Obituary & Service Information

The family of Richard Andre Countryman created this Life Tributes page to make it easy to share your memories.

Send flowers to the Countryman family.