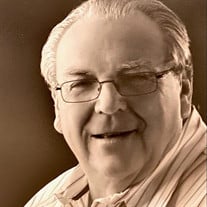 Richard Francis Fadgen, 79, son of Marie and TJ, was born in Trenton, New Jersey on May 4, 1942. He passed away on January 16, 2022, at Kennestone Hospital in Marietta, GA. At a young age, Richard developed a fascination and love for radio and TV which lasted his entire life. After graduating from Central Trenton High School in 1961, he went on to attend and graduate from Mississippi State University in 1966, with a Bachelor's degree in Business Management. Richard’s passion for communication took him up to the Northeast, where he worked his first job out of college at General Motors. Richard’s father was a Senior Executive in the research and development department, and he was credited for creating the first set of Plastic Safety goggles, the same type that are used today. Richard would serve in the Army and was active in the National Guard during the Hartford Race Riots. He would recall that experience as a rude awakening for our country, but also thought we would have “done a better job uniting as a country”. Richard worked in sales for numerous companies but ended up working for East Penn Manufacturing and became a Regional Sales Manager, and after 26 years, he retired from Deka Battery. In 1964, he married Corma Lee Fadgen and moved to Miami in 1975, where her parents, Popeye and Bettye Fischer lived. They had one child together: Frances Lee (1971). Richard was raised in the Catholic faith throughout his formative years, he met with some difficult times and thought that his faith in the Catholic Church had been broken. He still held the virtues of the Christian belief and loved helping people and believed in "unity through spirituality". He and his wife had a passion for cruising the world, Alaska, the Panama Canal, all of Europe, and a litany of cruises to the Caribbean. After over a decade, they had amassed over 500 days at sea, which equals 4 complete circumnavigations of the world and all with Holland America cruise lines. The lock down from the quarantine and Richards' numerous health concerns had put that on hold, but the goal was for him to “set sail” one more time. He was a loving husband and parent who often showed his love by gift-giving. He had a goofy sense of humor and would love to tell outlandish stories about his time in the CIA and Mafia, all at the same time. It was his form of an ice breaker and it kept you in suspense. Richard was very interested in and cherished his time with his grandkids. Watching them play baseball was a highlight for him and he would always tell them they did a good job and made him proud! He is survived by one child, Frances Halvorsen and her husband, Chip Halvorsen of Marietta, Georgia. His older brother, Phil Fadgen and his wife, Sherry of New York. His loving grandchildren, Severin and Russell; and his loving wife, Corma Lee Fadgen, who tirelessly moved heaven and earth for him to maintain his independence and a happy life! His memorial service will be held on Saturday, January 22nd at 3:00 p.m. at Mayes Ward-Dobbins Funeral Home, Historic Marietta Chapel.

Richard Francis Fadgen, 79, son of Marie and TJ, was born in Trenton, New Jersey on May 4, 1942. He passed away on January 16, 2022, at Kennestone Hospital in Marietta, GA. At a young age, Richard developed a fascination and love for radio... View Obituary & Service Information

The family of Richard Francis Fadgen created this Life Tributes page to make it easy to share your memories.

Send flowers to the Fadgen family.