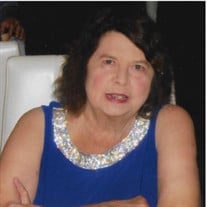 Louise, as she was known as, passed away on August 23, 2021. She was 77-years old. Louise was preceded in death by her husband Ben and eldest daughter Theresa. Louise, a full-blooded Cajun, was born in Alexandria, Louisiana into a family that included five siblings. Like her parents and siblings, she lived her life with a focus on family and faith. As a young adult, Louise had an adventurous life that many may not know of. Her early career included working as a fashion model and even a radio DJ. It was during this time she met her future husband - Ben - who was a lieutenant in the US Air Force stationed in Alexandria during flight school. They dated for a year until marrying on August 19, 1967. After marriage, Louise and Ben became avid birth control device testers with some notable failures including Theresa (deceased), Ben IV (52), Steven (50), Christine (48), Brian (47), Mary (42), Kathryn (35) and Alison (34). Given the complexity presented from the sheer volume of these byproducts of a good time, Louise focused much of her life on being a wife and mother. She spoke of these roles as her proudest accomplishments, and surely it had to be more adventurous than being on the runway or on the radio! When not cooking meals or packing school lunches, Louise enjoyed sewing and other craft related hobbies (macramé will make a comeback). And boy did her kids like sporting homemade clothes - even more so than the home haircuts! In her last years and even with severe arthritis in her hands, Louise loved cranking up the sewing machine. She could always be counted on to fix a garment or hem some pants on a moments notice. And with these skills she perfected the Christmas stocking, which each of her twelve grandchildren will cherish forever. Louise also loved the mountains, and spent considerable time in north Georgia at her mountain property. And she passed this love of the area onto her children, which led to an annual family gathering there every July 4th - which is why Independence Day was her favorite holiday. Louise was a devout Catholic, having been a member of St. Joseph’s parish in Marietta, Georgia for over 40-years. Recently she transferred her allegiance to rival St. Clare’s, bringing her talents to Acworth, Georgia at an unusually late stage of her career. She had a positive impact as a parishioner and will be missed by both church communities. With consideration to the current health crisis, a private mass will be held for family only. Louise asked that in lieu of flowers, donations be sent to the American Heart Association. https://www.heart.org/en?form=FUNDEDLRECZ

Louise, as she was known as, passed away on August 23, 2021. She was 77-years old. Louise was preceded in death by her husband Ben and eldest daughter Theresa. Louise, a full-blooded Cajun, was born in Alexandria, Louisiana into a family... View Obituary & Service Information

The family of Rita Louise Harper created this Life Tributes page to make it easy to share your memories.

Send flowers to the Harper family.