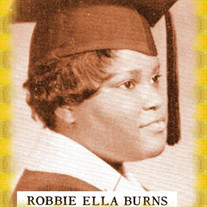 Robbie Ella Burns Jones was born to the late Elder Robert and Emma Baker Burns on July 11, 1944. Robbie went to her eternal rest on August 15, 2020 in Marietta, Georgia after a long and courageous fight with congestive heart failure. She was devoted, loving, family oriented, and a humble wise woman of God with much faith! Robbie accepted Christ as a teenager and was baptized at Mt. Sinai Primitive Baptist Church in Nashville, Tennessee by the late Elder Washington Green. Robbie was educated in the public-school system in Nashville, Tennessee and graduated with honors from Cameron High School. She began her college career at Tennessee State University and later attended Trevecca Nazarene College where she earned her Bachelor of Science Degree in Business Administration while working full time. Robbie was the “Queen” of her family and she held her family dear to her heart. She married Maxie Allyne Patterson, Sr., in 1965 and twin daughters and one son resulted from this union. In 1987, she married her loving and devoted husband Howard D. Jones of 33 years and one daughter and three sons came into her life as a result of this union. Robbie was diligent and conscientious in all aspects of her career, excelling as Secretary to the late Judge John Jenkins at Juvenile Court and later became the Executive Secretary to the late Dr. C. N. Adkins, Executive Director of The Sunday School Publishing Board the official publisher of the National Baptist Convention, USA Inc. Robbie worked there until her health began to decline, and she retired in 1995. Robbie was an active participant, real doer, in church ministry throughout her life. Robbie became a member of Gay Lea Christian Church in Nashville, Tennessee. Later (2003), Robbie became a member of Mt. Zion Baptist Church in Nashville, Tennessee pastored by Bishop Joseph Warren Walker, III, D. Min. (Senior Pastor). Robbie was member of Mt. Zion until her passing. Robbie sowed many seeds of love to her family, extended family and friends. She loved to entertain, plan events, travel, shop, but most of all, she was an encourager to all. Her smile was contagious and lit up any room that she entered. Robbie’s favorite saying was, “Only what you do for Christ will last” and she preached this all the time. Robbie will be sorely missed but she has earned her wings and is now resting in the arms of our loving Savior, Jesus Christ. She is survived by her loving and devoted husband Howard D. Jones, four sons: Maxie Allyne Patterson, Jr., Richard, Howard and Chris Jones; two daughters: Lori Latasha (Spencer) Lee, III; Lori Lucretia (Wayne) Smith, Jr.; one daughter preceded in death (Regina Jones) ; sisters: Rosa Pearl McFarland, Velma Jean Frazier, Emma Mai Burns and Gwen (Niles) Foreman; siblings preceded in death (Raymond Burns, Sr., Lawrence (Hattie Mae) Burns and Odessa Brannon); numerous grandchildren, godchildren, nieces, nephews and a host of extended family and friends. The everlasting memory of her strength and faith will always be embedded in the hearts of all who had the privilege of knowing her. ACKNOWLEGEMENTS For all expressions of kindness, understanding, prayers and words of comfort, we thank you. We extend a special thanks to Dr. Charmayne Patterson and Mrs. Shirley Dial for being such amazing caregivers for mama and for your unconditional love shown towards her. Also, we extend a special thanks to Presbyterian Village Nursing Facility for the love and care that was shown towards our loved one. The family of the late Robbie Ella Burns-Jones would like to thank you for your support and prayers during our time of bereavement

Robbie Ella Burns Jones was born to the late Elder Robert and Emma Baker Burns on July 11, 1944. Robbie went to her eternal rest on August 15, 2020 in Marietta, Georgia after a long and courageous fight with congestive heart failure. She was... View Obituary & Service Information

The family of Robbie Burns-Jones created this Life Tributes page to make it easy to share your memories.

Robbie Ella Burns Jones was born to the late Elder Robert and...

Send flowers to the Burns-Jones family.