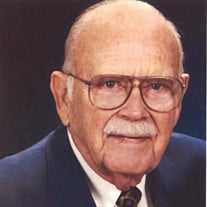 Robert Davis Arrants “Bob” age 94, passed away peacefully on Monday, May 11, 2020. He was born on Feb 22, 1926, in the small town of Decatur, Tennessee, in Meigs County to Samuel Edwin Arrants and Lena Davis Arrants. He and his brother Reed grew up with their parents in a white farmhouse in Decatur. Bob must have shown his friendly, outgoing personality early on, as he won a local beautiful baby contest. He and his brother enjoyed helping on the farm and being part of the local community. His dad, Sam, was a local teacher, coach, school principal, and US Mail carrier, and his grandfather N.A. Arrants was the local doctor. The Arrants doctor’s home and office still stands in Decatur where it serves as home of the Meigs County Historical Society. The Arrants ancestors valued education and many generations received degrees from Vanderbilt University and the University of Tennessee. After graduating from high school, Bob went on to attend the University of Tennessee in Knoxville where he was a member of the Delta Tau Delta Fraternity. His college career was interrupted by World War II. Bob volunteered to join the US Navy and served his country for two years from June 1944-June 1946. After the war, Bob returned to University of Tennessee in Knoxville. Bob graduated from UT in the Spring of 1949 with Bachelor of Science in Business Administration. He was a lifelong UT Volunteers fan and enjoyed watching UT football and basketball throughout his life. It was during this time that he met the love of his life, Lou Jean Bryant Arrants. After graduating from high school she worked in Knoxville at the telephone company. Bob & Lou Jean met on a blind date, and Bob fell for Lou Jean then and there. He knew he had found his date for life. Bob and Lou Jean married in September of 1950 in Knoxville. Thus began their great lifelong love story. Bob & Lou Jean began their married life in Knoxville and lived in several cities in Tennessee and Alabama before moving to Marietta, Georgia, in 1960, where Bob worked as a pharmaceutical sales rep with the William S Merrill Company. Marietta became their home and the community where they would live, make friends and raise their three children, Steve, Mike, and Jan. They have been members of the First United Methodist Church in Marietta since 1960, where Bob served as Sunday School class president and as a member of the official board. Later, Bob became a home builder for many years and along with his two sons, Steve and Mike, they built many homes in Cobb County until his retirement in 1994. During his retirement Bob enjoyed reading, traveling, volunteering and spending time with his family. He was a member of the Marietta Golden K Kiwanis, and often met his buddies for coffee and breakfast where they enjoyed sharing the latest jokes together. The greatest joy of Bob’s life was spending time with his wife and family. Bob & Lou Jean shared many happy times with their children and grandchildren. Bob was very close to his three children and spent a lot of time with Steve, Mike and Jan. Needless to say, Bob and Lou Jean were their best friends. They were their children’s and grandchildren’s biggest fans and they were always present at every ball game, sporting event, band concert, birthday party, or special occasion. Bob was outgoing, fun to be around, sweet natured, loving and giving. He always had a smile on his face and a twinkle in his eye. He always delighted in picking out just the right card for Lou Jean‘s birthday or anniversary. He was a loyal and giving husband, father, and grandfather. During the last few years as his health declined Bob kept a positive and upbeat attitude. Whenever someone would say, “Bob, you look good.” He would reply, “I feel good.“ He never complained, and always displayed a caring and loving attitude with his family. It was Lou Jean’s greatest wish that she would be able to provide for Bob in his last days, and God answered her prayers. She tenderly cared for him and never left his side. We will miss Bob forever here on earth, but we know that God has promised that we will see him again. And what a glorious reunion that will be. We can take comfort in knowing that when he arrives to his Heavenly home he will hear these words from Matthew 25:21: “Well done, thou good and faithful servant...enter thou into the joy of thy Lord.” Bob leaves behind a legacy of love. Bob is preceded in death by his brother, Reed Arrants and by his grandsons Dean Arrants and Ben Maloney. He is survived by his wife of 69 years, Lou Jean Arrants, and his children Steve Arrants and wife Donna, Mike Arrants and wife Sheila, and Jan Arrants Matthews and husband Brett. He is also survived by grandchildren Bryant Arrants (Kasey) , Christopher Arrants, Michelle Arrants Shaw (Clay), Dale Arrants, Davis Arrants, Josh Arrants, Sam Arrants, Amy Matthews, Brett Mac Matthews (Erin), Austin Matthews, and great grandchildren Haeden Matthews, Caelyn Matthews, Kaymin Arrants, Liam Maloney, and Benlee Maloney, and his sister in law, Jean Arrants, nephew George Arrants (Kim), great niece and nephew, Morgan and Benjamin Arrants.

The family of Robert Davis Arrants created this Life Tributes page to make it easy to share your memories.

Send flowers to the Arrants family.