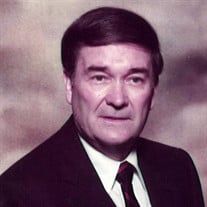 Robert “Bob” E. Savage, after 95 remarkable years, passed away peacefully in his home in Marietta surrounded by family on March 12, 2021. Bob was born in Canton, GA on September 27, 1925 to parents Walter and Nora Mae Savage. On March 1, 1942, he married his lifelong sweetheart Aline Carter, and shortly after joined the United States Army to serve proudly in World War II. Bob and Aline were married for 64 years, until Aline’s death in 2005. Their union produced 5 children, 13 grandchildren, 11 great grandchildren, and 3 great, great grandchildren. Bob’s priorities have always been his family, church, and business. Bob’s career began as a bread truck driver, after which he entered sales and enjoyed a career in the baked goods industry for many years. In 1964, Bob opened his own food brokerage business, Savage & Company, and faithfully managed it for 57 years. Bob is a longstanding member of Mary’s Memorial Baptist Church where he loved singing in the choir. In his later years, Bob was known to break out in Amazing Grace at family gatherings. Bob’s family remembers him as a true southern gentleman, and a devoted husband, father, grandfather, and great grandfather. He will continue to inspire us with his life and example. His family is greatly comforted knowing he is now at peace resting in the everlasting arms of God. Bob is survived by his five children, Bobby Savage, Ron Savage, Barbara Savage, Chris Savage, and Lynn Abel; his grandchildren and great grandchildren. Due to COVID restrictions, the family has decided to hold a private service at this time. The family requests that in lieu of flowers, donations be made to the American Heart Association in honor of his beloved wife, Aline. Mayes Ward-Dobbins Funeral Home in Marietta is handling the arrangements.

The family of Robert "Bob" E. Savage created this Life Tributes page to make it easy to share your memories.

Send flowers to the Savage family.