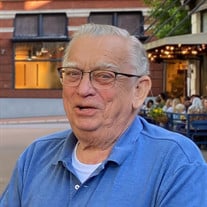 Robert “Bob” Edgar Botni passed unexpectedly on August 15, 2021. Bob was born to Julius and Ola (Reese) Botni on September 9, 1937, in Yorkville, Ohio. He graduated from Yorkville High School in 1955. After graduation, he enlisted in the United States Air Force and was stationed at Mountain Home Air Force Base in Idaho, where he was honorably discharged on January 2, 1960. Soon after, he moved back to Yorkville, Ohio, and met his soul mate from Wheeling, West Virginia, Dorothy Kavrakis. They married in February of 1963, and moved to Columbus, Ohio, for his position with North American Aviation. He became a Dad the following year with his daughter, Roberta. Later that year, he moved his family of three to Smyrna, Georgia, to begin his career with Lockheed Georgia where he worked on the C-5A. While working nights, he completed his associates degree from Marietta Vocational Technology School in Electronics. In 1968, his family added another baby girl, Mary. The following year he moved his family to their first home in Marietta, Georgia. Bob retired from General Electric Medical Systems and enjoyed being with his wife, children, grandchildren, extended family and friends. Bob took pride in his family. He was a loving husband and a caring father to his two girls. He was a respected and observant man of many interests. Bob enjoyed airplanes and trains and was an active member of the Holy Transfiguration Greek Orthodox Church since the beginning. Through all of this he had many friends. “Papou” had a soft spot for his seven Grandchildren and loved supporting them in whatever they were involved in. Bob is survived by his wife of 58 years, Dorothy (Kavrakis) Botni, daughters Roberta (Mark) Cable and Mary Bennett, grandchildren Anthony Bennett, Sydney Bennett, John Robert Cable, Zachary Cable, Nicholas Cable, Colin Bennett, and Joseph Cable. He was preceded in death by his parents, Julius and Ola (Reese) Botni, sisters, Dorothy Merritt, Hazel Campbell, Ruth Boldrini, and brother, William Botni. Arrangements are as follows: Visitation – Sunday, September 12 from 5-7 pm (6pm Trisagion Service) at Mayes Ward-Dobbins Funeral Home in Marietta, Georgia. Funeral – Monday, September 13 at 11am at Holy Transfiguration Greek Orthodox Church, Trickum Road, Marietta, Georgia. Burial to follow at Green Lawn Cemetery in Roswell Georgia near the intersection of Highway 9 and Mansell Road. The Makaria (luncheon) will follow burial at Holy Transfiguration Greek Orthodox Church, Trickum Road. In lieu of flowers, donations can be made in his memory to Holy Transfiguration Greek Orthodox Church, 3431 Trickum Road, Marietta, Georgia 30066.

The family of Robert Edgar Botni created this Life Tributes page to make it easy to share your memories.

Send flowers to the Botni family.