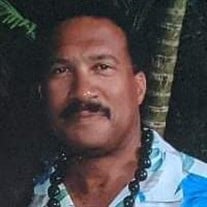 Robert B. Cooper, 60, of Powder Springs, GA. entered into rest on Saturday, July 10, 2021, in Austell, GA. A Celebration of Life will be held on Monday, July 19, 2021, at 6 o’clock at Mayes Ward-Dobbins Macland Chapel with Reverend Gladys Ball officiating. Robert will be laid to rest at Georgia National Cemetery in Canton, GA on Tuesday, July 20, 2021, at 9 o’clock. Robert is survived by his loving wife Kim Cooper; mother, Albertha Cooper; sons, Omar Hunt & wife Veronika, Evan Cooper & wife Jessica, and Aaron Cooper; sisters; Phyllis Jewell & husband Darin and Eugenia Drake & husband George; grandsons, Attila Hunt and Landry Cooper; granddaughter, Annamaria Hunt; mother-in-law Marie Hunt; sister-in-law, Lynette Russell; and many aunts, uncles, nieces, nephews, and friends. Robert was born into the large loving Cooper family on Wednesday, December 21, 1960, in Dania Florida. He grew up in the Hollywood & Tampa Florida areas and after graduating from high school, joined the United States Army in 1978. Robert proudly served in the prestigious 3rd United States Infantry, also known as the “Old Guard”. Robert then transferred into the medical field as a Behavioral Specialist and ended his military service as an Army helicopter and fixed wing pilot in 1998. After retiring honorably from the Armed Forces, he worked for 17 years for the Federal Aviation Administration as an Airspace Systems Inspection Pilot in Atlantic City, NJ and in Atlanta, GA and as an Aviation Safety Training Manager in Fort Worth, TX. Robert was a dedicated, hardworking professional who was a mentor and a leader in his field. Robert met the love of his life, Kim Hunt in May 1981 and they married on Saturday, September 25, 1982, giving them 38 wonderful married years together. Robert and Kim raised 3 loving sons, Omar, Evan, & Aaron, and as a family they traveled the world together while Robert served in the military and beyond. Robert had a zest for life, and he shared that with everyone around him in words and deeds. He enjoyed fishing, boating, riding in his sports cars, teaching himself to play guitar, and was a fixer and a doer, always loving a challenge. He visited many countries exploring the world, but most of all, he enjoyed spending time with his family and friends. Robert was a devoted and loving husband, father, and grandfather. His inspirational and caring presence will be forever missed. Family has asked in lieu of flowers that donations be made in Robert’s name to the Cholangiocarcinoma Foundation at https://cholangiocarcinoma.org/ mdonate/ . Arrangements under the caring guidance of Mayes Ward-Dobbins Funeral Home & Crematory. www.mayeswarddobbins.com

The family of Robert B Cooper created this Life Tributes page to make it easy to share your memories.

Send flowers to the Cooper family.