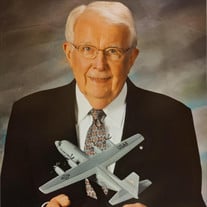 Mr. Robert H. “Bob” Hill, age 88, a lifelong resident of Marietta, passed away peacefully, surrounded by his family, on Saturday, January 8, 2022 following a brief illness. Bob was born in Cobb County, Georgia April 16, 1933, the son of Pansy Heartsell and Charles A. Hill, Sr. He was preceded in death by his parents, brothers Charles A. Hill, Jr., William Hill, Joel Hill and sister Margaret Ann Willis Weideman. He is survived by his loving wife of sixty-nine years, Allene McConnell Hill; son Doug Hill, and wife Carolyn of Adairsville and daughter Vickie Hill of Naples FL and son Rick Hill of Miami FL. Grandson Tyler Keylon and his wife Mallory and granddaughter Annie Hill. Many nieces and nephews also survive. He graduated from McEachern High School in 1950 and later in life graduated from Embry Riddle Aeronautical University with a Bachelor of Professional Aeronautics in 1990. He retired from Lockheed Martin in 2007, after a career spanning 55 years. He began his career at Lockheed as a Storekeeper and advanced over the years to Chief Pilot, Production and Delivery. His passion was always airplanes and flying. He once rebuilt a Piper Cub Super Cruiser plane in his basement and went on to fly that plane. Over his career he was able to fly many different Lockheed planes, but the C-130 Hercules was his beloved favorite. Over his career, he logged thousands of flight hours. After retirement, he performed FAA Designee Pilot and Flight Engineer flight examinations for U. S. Military applications for several years. During this time, he also worked in Italy as a C-130J simulator instructor. Over the course of his career, he was the recipient of many awards, including the Wright Brothers Award and the FAA Master Pilot designation as recognition for more than 50 years of flying as a pilot. He was a member of the Society of Experimental Test Pilots and was one of their few SETP octogenarians. He was a member of Roswell Street Baptist Church for sixty years and was a member of the Kingdom Seekers Sunday School Class. He loved to travel and was able to visit many countries around the world delivering C-130s to Lockheed’s customers and he and his wife Allene travelled extensively for pleasure throughout the years. His greatest pleasure was his family and his grandchildren. He took great pride in each of his children’s and each of his grandchildren’s accomplishments. He was a fan of the Atlanta Braves and loved watching tennis! He loved gardening and reading. The family will receive friends on Friday, January 14, from 11:00 a.m. until 1:00 p.m. at Mayes Ward-Dobbins Funeral Home, Marietta, GA. Following visitation, services for Mr. Hill will be conducted at 1:00 p.m. in the chapel of Mayes Ward with Pastor Michael Lewis officiating. Interment to follow in Kennesaw Memorial Park, Marietta GA. In lieu of flowers, please donate blood, support a favorite charity, or perform an act of kindness in his honor. According to the CDC, social distancing and everyday preventative actions should always be practiced at visitations and funerals. The family requests that you abide by these guidelines and wear masks at the visitation and the funeral. For those who are more comfortable staying home, we will be broadcasting the service virtually. Thank you.

The family of Robert H Hill created this Life Tributes page to make it easy to share your memories.

Send flowers to the Hill family.