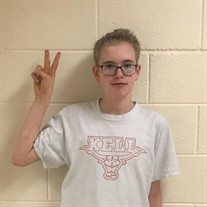 Robert Randal (&#8220;Robby&#8221;) Schulz, beloved son, brother, student, and friend, was suddenly and tragically taken from us on August 26, 2020, when he was struck by a car while riding his bicycle. Robby was a sophomore at Kell High School.... View Obituary & Service Information

The family of Robert Randal "Robby" Schulz created this Life Tributes page to make it easy to share your memories.

Send flowers to the Schulz family.