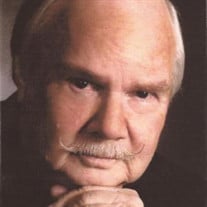 Robert Raymond Taylor went to live with his LORD on June 13, 2020. A Memorial Service will be held at 2:00 PM on July 1, 2020 at Mayes Ward-Dobbins Macland Chapel in Powder Springs, GA. with an inurnment to follow at Meadowbrook Memory Gardens in Villa Rica, GA. Reverends Tom Gray, Allen Scott, and Jim Stein will be officiating the service. Robert is survived by his daughters Heidi Taylor of Atlanta, GA. and Wendy Taylor of Birmingham, AL. His oldest daughter, Robin Taylor passed away in 2008. Three grandchildren; Benjamin Taylor of Atlanta, GA.; Brianna Taylor of Decatur, GA. and Charles Taylor of Powder Springs, GA. Mr. Taylor graduated from the Child Evangelism Bible Institute, and attended the University of Minnesota, and William Carey College in Mississippi. He took classes at the Southeastern Bible College in Birmingham, AL. Rob retired as President of Civic Fire Protection, Inc, a company he organized and operated for 18 years. Before that, he was Sales Manager for a publishing Company where he received an award of SALES MANAGER OF THE YEAR. Earlier, he was one Terminal Manager in Huntsville, Alabama for Continental Trailways Bus Lines. He also is listed in WHO’S WHO for various accomplishments. After his retirement from business, he went on to write and publish three books of Christian fiction: ESTHER’S MIRROR, A LONG CLIMB UP TO THE BOTTOM, and THE PRODIGAL KING. He also wrote ALPHA OMEGA, a simplified version of the Bible story. Rob was a member of the Paulding Writer’s Guild of Dallas, GA. and once co-taught a writer’s seminar at a Dallas library. He also composed several poems, some of which were published in independent publications. He has been featured in several newspapers. Rob was nominated for GEORGIA AUTHOR OF THE YEAR for his book published in 2015. In addition to literature, he wrote two songs and had them recorded for his personal use: WILL I SEE MY HOME AGAIN (about a soldier dying on the battle field and asking that question to the Chaplain,) and HEROS, a song about the events of 9-11-2001. Rob was an award-winning artist, painting portraits and other subjects. He was a member of two local art clubs and was once a member of the National Portrait Society. In Rob’s early life he was a licensed airplane pilot and won a trophy in driving in Stock Car races in Birmingham. In Christian endeavors, he has been a member of the Christian Business Men’s Committee Int’l. He was Director of Child Evangelism Fellowship of Southern Mississippi. After that, he continued to serve as a Board member for two other CEF organizations. Rob also taught Sunday School at one time and was active in evangelism, using tracts that he wrote. One of his “ministries” was donating three of his books to many Jail and Prison inmate libraries in various states. Rob often said of this ministry, “THERE, I HAVE A CAPTIVE AUDIENCE FOR MY BOOKS!” Mr. Taylor was a veteran of the US Army and member of the American Legion in Marietta, GA. Rob says, “I lived a full and often adventurous life, but none of anything I was successful in would have been possible without the divine leadership of my Lord. Although I may have had the privileges of God’s leadership in my life, the best blessing of all is my family, particularly my grandchildren of whom I am very proud.” The family will receive friends between the hours of 1:00 PM and 2:00 PM on Wednesday, July 1, 2020 prior to the service. Arrangements made under the caring guidance of Mayes Ward-Dobbins Funeral Home www.mayeswarddobbins.com 770-943-1511

Robert Raymond Taylor went to live with his LORD on June 13, 2020. A Memorial Service will be held at 2:00 PM on July 1, 2020 at Mayes Ward-Dobbins Macland Chapel in Powder Springs, GA. with an inurnment to follow at Meadowbrook Memory Gardens... View Obituary & Service Information

The family of Robert Raymond Taylor created this Life Tributes page to make it easy to share your memories.

Robert Raymond Taylor went to live with his LORD on June 13,...

Send flowers to the Taylor family.