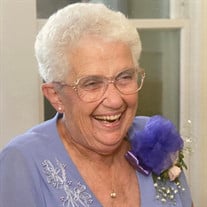 Rose Marie (McPartlan) Landry, 88, passed away peacefully at WellStar hospital after a brief illness, surrounded by family on Thursday, August 26, 2021. Rose was born and raised in Groton, MA, to Sara (Marquis) & John McPartlan. She graduated from the Groton High School in the late 1950, and worked at both The Old Groton Inn and the Groton Drug Store as a “Soda Jerk.” She soon met the one love of her life, Tom, and the two were married not long after that. The couple moved to Pepperell where they begin a family and raised their four children. Rose was very active in the St. Joseph’s Parish, where she served as an extraordinary minister, worked on “penny sales,” and every year made the hot chocolate for the kids’ Christmas party. She was also active in the Knights of Columbus where she was President of the Ladies’ Auxiliary. When Rose retired from her work in Hollis, NH, she became very active in the Pepperell Senior Center and was instrumental in the project that led to the fundraising and building of its dedicated home. Rose spent many days at “The Center” where she volunteered as well as took part in the various activities. Rose was a loving and supportive mother to her 4 children, 14 grandchildren and 7 great-grandchildren; she truly loved being a grandmother and she did it well! Rose had many hobbies. She loved to go to Bingo with her friends, swimming in the family pool, she loved to spend summers with her husband in their camper in NH, and she loved to bake, knit, and crochet. She was never bored. In 2018 Rose and Tom left Massachusetts to live with their daughter Barbara, and family, in Powder Springs, GA, where they both could maintain their independence while given the care, the love and the dignity they deserved in their final years. Rose was predeceased by her husband, Thomas R. Landry, of 64 years as well as her brothers John McPartlan and Edward McPartlan. Rose is survived by her daughters, Pamela Richards (Walter), Patricia Landry and Barbara Foster (Peter); son, Thomas M. Landry (Hugh Kennedy); brother-in-law, Robert Carlson; 14 grandchildren and 7 great grandchildren. She is also survived by several nieces, nephews and extended family. A graveside service will be held at 9:00 a.m. on Tuesday, August 31st at Georgia National Cemetery in Canton, Georgia. The family will receive friends after the service at 12:00 p.m. at the home of Peter and Barbara Foster.

The family of Rose Marie (McPartlan) Landry created this Life Tributes page to make it easy to share your memories.

Send flowers to the Landry family.