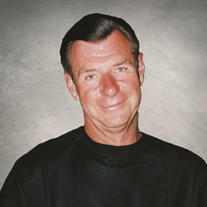 Samuel “Sam” C. Matthews, 73, passed away on Monday, March 15, 2021 at his home in Panama City surrounded by his family. The family will hold a private service where he will be interred at Cheatham Hill Memorial Park, Marietta, GA. Sam was born on May 1, 1947 at Emory Hospital in Atlanta and grew up in Marietta. After graduating from Marietta High School in 1965 he attended the University of Georgia and received his degree from Kennesaw State College. He started working in the family business, C.W. Matthews Construction, when he was 13 and continued working there until he left Marietta in 1990. He then moved to Florida and made it his home. While in Florida, he continued to be successful in business as a commercial real estate investor. In 1991, he met his wife, Crystal, who he married in 1997. They both enjoyed boating, taking RV trips and traveling. He loved to visit his home in the mountains, watching Nascar and college football, especially his Georgia Bulldogs. His last few years he enjoyed spending time with his wife, Crystal; daughter, Kim; beloved dog, Lily, and all the special family and close friends that would come by to visit him. The family is extremely grateful for his loving nurses, Alexis, Danique and Cosme who became just like family. He is survived by his loving wife, Crystal Matthews, of Panama City, FL; daughter, Kimblaine Matthews, of Woodstock, GA and his brother, Bob Matthews, and wife, Dianne of Marietta, GA. He is also survived by several nieces, nephews and extended family. He was predeceased by his son, Travis William Matthews, and his parents, C.W. and Myrtle Matthews. In lieu of flowers, contributions may be made to Saluda United Methodist Church, P.O. Box 551 Saluda, NC. 28773.

Samuel &#8220;Sam&#8221; C. Matthews, 73, passed away on Monday, March 15, 2021 at his home in Panama City surrounded by his family. The family will hold a private service where he will be interred at Cheatham Hill Memorial Park, Marietta,... View Obituary & Service Information

The family of Samuel "Sam" C. Matthews created this Life Tributes page to make it easy to share your memories.

Send flowers to the Matthews family.