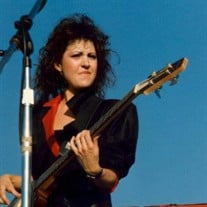 Sharon Lynn Iles was born on October 22, 1964, in Mariemont, Ohio. She passed away peacefully, at age 57, on December 19, 2021, in Augusta, GA. Sherry is survived by her mother Patty Iles, sister Angela Dubiel (James), brother Matthew Iles (Alicia). Four dear nieces Isabella Iles, Sophia Wentz, Sarah Dubiel, LoriAnn Iles, and two dear nephews Zachary Wentz and Nathan Iles. Sharon was preceded in death by her father Tom Iles, May 22, 2020. She leaves many aunts, uncles, cousins, and dear friends. Sharon was a musician, primarily a Bass player and vocalist. Her love for music was a God given talent, which began on her 12th birthday when she received a guitar from her dad. She grew up in Marietta, GA and graduated from Osborne High School where she was in drama class, chorus, and marching band. After graduation she moved to Seattle, Washington where she and four other women, from multiple areas around the states, got together and formed a rock band called Hijinx. The band was successful and served as the headlining group at a major venue in the Seattle area, called Montana’s for many years. Seeking bigger stages, she moved on to the glitter of Las Vegas, where she played in prestigious venues such as Caesar’s Palace, Bally’s, and Bourbon Street. In the 90’s she embarked on a southeastern tour opening for the Indigo Girls, as part of a duo with singer Rache Alpert. She has performed with Ronnda Cadle and the String Poets, and was currently a member of Lo Down Brown, Atomic Road and The Usual Suspects, all based in Aiken, SC and Augusta, GA. Sharon will be remembered for her intelligent, quick witted personality. She loved her family deeply and anyone who was fortunate enough to be her friend was dearly loved by her. She was a member of the band Lo Down Brown, who performed yearly at the Etherredge Center for a benefit for the Heart Fund, given by the Aiken South Cardio Women’s Heart Board. In lieu of flowers, please send a donation in Sherry’s honor to the Aiken Women’s Heart Board, PO Box 5211, Aiken, SC 29804. Services will be held 2:00 PM Thursday, December 30th at Mayes Ward-Dobbins Funeral Home in Marietta, GA There will a reception after the service at The Family Life.Center at Due West United Methodist Church, 3956 Due West Rd, Building B, Marietta, GA 30064.

The family of Sharon Lynn Iles created this Life Tributes page to make it easy to share your memories.

Send flowers to the Iles family.