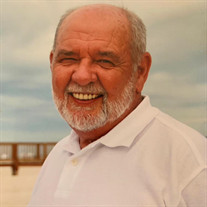 Mr Stanley Andrew Kordish, 77, of Marietta, GA passed away on Friday, November 19, 2021. A Memorial Mass and Celebration of Life will be held at 10:00 am Friday, November 26 at Saint Joseph Catholic Church in Marietta, GA. Stan was preceded in death by his parents, Andrew Kordish and Mary Kordish and his in-Laws Helen and John Vasas. He is survived by his loving wife of 56 years, Sharon Vasas Kordish; his daughter Stefanie Kramer and her husband George; his daughter Jennifer Vogt and her husband Rich; and 5 grandchildren: Will, Susan, Tyler, Jackson and Cooper. Stan graduated in 1962 from Notre Dame High School in Connecticut. After graduation he married the love of his life, Sharon, in 1965 and they moved to Marietta, GA. Stan is a graduate of Southern Technical Institute in Marietta, Georgia and the LSU School of Banking of the South in Baton Rouge, LA. After moving to Marietta, he worked for the Lockheed-Georgia Company on the C-130A. He then began a long and successful career in the banking industry where he worked until his retirement. He and Sharon moved to Hiawassee, Ga in 1998 where they enjoyed their time in the mountains and riding around in their red Jeep until they returned to Marietta in 2015. Stan was very active in his community both in Marietta and in Hiawassee, GA. He enjoyed working with his hands and spending time in his workshop. He had a very generous heart and enjoyed helping others. His pride and joy was his family- his wife, his daughters and his grandchildren. When his girls were younger, he could be found many a night and weekend at their school, the softball field, swim meets, the tennis courts or the track field. He loved spending time with his grandchildren cheering them on from the sidelines as well as participating in different activities with them. He enjoyed playing golf and tennis and cheering on the Georgia Tech Yellow Jackets, Atlanta Braves and the Fighting Irish of Notre Dame. Stan loved spending time with his family and friends. He loved a good party and loved to laugh, have fun and enjoy life. Stan was a faithful and active member in the Catholic Church. He was a long time member of Saint Joseph Catholic Church in Marietta and Saint Francis of Assisi Catholic Church in Hiawassee. He was also a Third Degree Knight with the Knights of Columbus. In lieu of flowers, donations may be made to Knights of Columbus-Council 4599, 1524 Forest Trace, Marietta GA 30066.

Mr Stanley Andrew Kordish, 77, of Marietta, GA passed away on Friday, November 19, 2021. A Memorial Mass and Celebration of Life will be held at 10:00 am Friday, November 26 at Saint Joseph Catholic Church in Marietta, GA. Stan was preceded... View Obituary & Service Information

The family of Stanley Andrew Kordish created this Life Tributes page to make it easy to share your memories.

Mr Stanley Andrew Kordish, 77, of Marietta, GA passed away on...

Send flowers to the Kordish family.