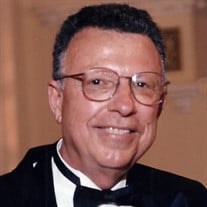 Stellios (Steve) Lawandales died on May 3 of natural causes. He was 82. Stellios was the youngest of four children, born June 17, 1937 to Greek immigrants, Frank and Mitza Lawandales, in Charleston, SC. At 17, he graduated a year early from high school to attend The Citadel, The Military College of South Carolina, where he collected a bachelor’s degree along with treasured stories, sayings and friends that he would carry throughout his life. Stellios graduated from the Citadel in 1958 – the same year he met and married his wife, Olga (Mickey) Lawandales. The pair shared a quick wit, vibrant sense of humor, joy for life and 58 beautiful years of marriage. In 1967, Stellios founded The Lawandales Group – an investment, insurance and retirement consulting firm, where he worked to establish the very first privately-owned outpatient surgical center in the United States. In 1972, Mickey and Stellios moved to Marietta, GA where they raised their three children – Anita, Stephen and Kari. After 30 years, Stellios retired in 1997 to transition into his full-time role as doting grandfather to his six grandchildren. He served as the ever-present cheerleader at horseback riding competitions, swim meets and lacrosse & basketball games; offered master classes in golf, fishing, boating and driving; ran the school run; scheduled trips to the barber shop for his only grandson; and was always on-call to offer up his take on key life lesson. Stellios had a larger-than-life personality but found joy in the small things – sharing a Vernors with his wife in matching recliners, spending time with family or just going for a drive. He had a great love of food – one that was most evident when you asked for directions, and he offered a route by “rights” and “lefts” at his favorite restaurants rather than road names. He was an active member of the Greek Orthodox Church and a stalwart in the greater Atlanta Greek community. Stellios knew no strangers, possessing an uncanny ability to disarm most with a catchy saying from his days at the Citadel. Stellios leaves behind a legacy in his big, Greek family, who still share his catchy phrases with friends and strangers alike. In that spirit, as Dad, Papou, Sport or Stellios would say, “That’s all folks.” A private, graveside service will be held at Cheatham Hill Memorial Park on Thursday, May 7. In lieu of flowers, the family requests contributions be made to the Greek Orthodox Church of the Annunciation (2500 Clairmont Road, Atlanta, GA 30329).

Stellios (Steve) Lawandales died on May 3 of natural causes. He was 82. Stellios was the youngest of four children, born June 17, 1937 to Greek immigrants, Frank and Mitza Lawandales, in Charleston, SC. At 17, he graduated a year early from... View Obituary & Service Information

The family of Stellios "Steve" Lawandales created this Life Tributes page to make it easy to share your memories.

Stellios (Steve) Lawandales died on May 3 of natural causes....

Send flowers to the Lawandales family.