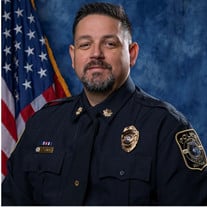 Stephen Anthony Campisi: June 23, 1971-July 20, 2021 of Marietta, GA. Steve was born in New Brunswick, NJ. He was preceded in death by his parents Peter and Lu Marie Campisi . He is survived by his wife, Linda Setser Campisi and three sons: Christopher, Thomas, and William. He is also survived by his brother, Peter Campisi (Annie Campisi), sister, Donna Campisi, and in- laws James and Mary Helen Setser, Kimberly Cochran, Tony Setser, and Scott Setser. His nephew is Nicholas Campisi, and his nieces are Elizabeth Campisi, Katherine Cochran, and Ansley Cochran. Steve attended Valdosta State University where he obtained a degree in Criminal Justice and became an officer with the Valdosta State University Police Department. He and Linda were married on November 2, 1996 in Marietta. He joined the Marietta Police Department, and obtained a masters degree in Public Administration from Columbus State University. At the Marietta Police Department, he held numerous positions and served the citizens of Marietta for 26 years. At his time of his death he held the rank of Major. Steve was honored in 2012 with the Alex Newsome Supervisor of the Year Award which is given to only one of Marietta's thousand employees each year. He also received the Difference Maker Award twice during his career. Steve was a devoted husband, father, brother, son, and son- in-law. He was a Christian and an active member of Due West United Methodist Church. He enjoyed spending time with family and coaching his three son's sports teams. He was outgoing, friendly, and always concerned about people he loved and those with whom he came in contact. Celebration of Life Services will be held on Monday, July 26, 2021 at 4:00 pm at Due West United Methodist Church at 3956 Due West Road, Marietta, Georgia 30064. In lieu of flowers, contributions can be made on a GoFundMe (https://gofund.me/2cb286ae) which will help to provide funding for Steve's three children and their college educations.

Stephen Anthony Campisi: June 23, 1971-July 20, 2021 of Marietta, GA. Steve was born in New Brunswick, NJ. He was preceded in death by his parents Peter and Lu Marie Campisi . He is survived by his wife, Linda Setser Campisi and three sons:... View Obituary & Service Information

The family of Stephen Anthony Campisi created this Life Tributes page to make it easy to share your memories.

Send flowers to the Campisi family.