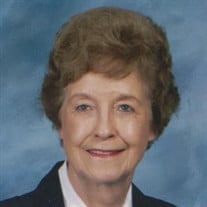 Nellie Sue Gann Merritt, 92, of Marietta passed peacefully on August 29 ,2021. Visitation will be Wednesday, 9/1/21 from 5:00 - 7:00 pm at Mayes Ward Funeral Home. Service will be on Thursday, 9/2/21, 11:00 am at Mayes-Ward Dobbins Chapel. Internment will follow at Mountain View Park Cemetery at 410 Whitlock Avenue, Marietta. A Cobb County native, Sue was a graduate of Robert L. Osborne High School and first worked at Carney’s Florist Shop in Marietta where she learned the art of making beautiful floral arrangements. During this time, and with the help of some fishing friends, she met, was courted by, and then married the love of her life Julius Andrew Merritt, nicknamed “Smutt” after his father. They remained in Marietta during their lifetimes. Sue would tell everyone that her greatest fortune was in 1951 when she filled in for another family member, who at the last moment could not make it, at a job interview at Lockheed and ended up getting the job herself at the age of 22. So proud of her job, she remained at Lockheed 48 years experiencing production years of the Hercules, C-5 and C-130. She worked in Timekeeping, Payroll, and then finished as a Price Estimator in Spares Pricing, aka, Spares Island. In addition to their full-time jobs and raising two daughters, Sue and Smutt tended a large vegetable garden at their home off South Cobb Drive, harvesting, canning and freezing some of the crop, and also sharing their bounty with friends and those in need. Sue grew up the daughter of a truck farmer and was no stranger to hard work in the fields. She managed to plow the fields behind a mule as a young girl and then found walking behind the rototiller Smutt bought her a much easier task. They continued to work and tend a large garden at that homestead for about 15 years and then moved to the City of Marietta. Sue and Smutt became members of First Christian Church in the early 1960’s and began their journey as loving, dedicated disciples, exemplifying stewardship service at its very best. Both served as deacons, elders, operations support, and leadership roles in the church. Well into their 80s, they could be found serving in the food pantry, repairing, building, or renovating to accommodate the growing church. Sue worked hard for the church taking care of everything from paraments to the kitchen, from Advent to Pentecost, and made sure the prayer vigil decorations were perfect. Her hobby of flower arranging ensured there would be beautiful flowers on the church altar every Sunday. Any reception the church hosted included Sue’s loving touch with her flower arrangements, silver serving pieces and beautifully pressed linens and lace. She loved evangelism, Christian Women’s Fellowship (CWF) and her prayer groups. Sue never missed a CWF retreat, attending for 50 consecutive years. She always took part in the closing ceremony where she and Smutt (the only male allowed to attend CWF retreats) created a display of luminaries on the lawn so massive that the candlelight could be seen from the heavens. Sue’s approach to life never changed—caring for and serving others. She remained a beloved member of the church until her passing. In 2017, Sue moved to Heritage at Sandy Plains Assisted Living. She was a part of their community for four years and made many friends as a resident in both assisted living and later in memory care. Heritage management and staff loved seeing Sue walking, exercising, and participating in activities and always sharing a smile and a hug. Sue’s family is grateful for the loving care the staff and caregivers showed her and for the many friendships. Sue is predeceased by her husband, Julius Andrew “Smutt” Merritt; siblings Catherine Gann Gosa, James H. “Corky” Gann, Betty Gann Powell and Gordon M. “Mickey” Gann; and one granddaughter, Alicia D. Collis. She is survived by her two daughters, Terry Merritt Collis (David) of Alabama, and Susan Merritt Gilstrap (Mitch) of Marietta; Spencer Collis (Caitlin) and Kim Collis Cagle (Brandon); Matthew, Katie and Jack Gilstrap; and four great-grandchildren; nieces and nephews. Contributions can be made in Sue’s memory to her beloved church: First Christian Church (Disciples of Christ), 569 Frasier Street, Marietta, GA 30060.

The family of Sue Gann Merritt created this Life Tributes page to make it easy to share your memories.

Send flowers to the Merritt family.