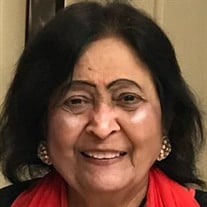 Tarla Kishor Daftari of Atlanta, Georgia, passed away on May 12, 2021, at the age of 81. Tarla Daftari was predeceased by her husband, Kishor Daftari, and her parents, Natvarlal and Kalavatiben Shroff. Tarla Daftari is survived by her daughter and son-in-law, Sona and Kris Koellner, respectively; her son and daughter-in-law, Dr. Tapan and Anisa Daftari; five grandchildren, Karah Fields, Nikki Player, Shivam Daftari, Manav Daftari, and Avi Daftari; and her great-granddaughter, Rory Fields. Tarla Daftari was born on May 20, 1940 in Mumbai, India to Natvarlal and Kalavati Shroff. She achieved a degree in law at the Xavier College in Mumbai, India. She married Kishor Daftari on May 10, 1961. After moving to the United States in 1969, she began working in New York City. Over the next several years, the couple and their two children moved around in several cities in the US for newer opportunities like New York, Miami, Fayetteville NC, Columbia SC , Effingham IL, before finally settling in Atlanta. Everywhere she moved, she instantly made friends and was well known for her fantastic cooking and parties. She loved playing cards, traveling, cooking, and taking care of people. Despite living in the US, her heart was always Indian. She was very religious and followed Pushti Marg Dharma every day. Her visits to India were yearly and, as of lately, frequently. She raised both of her children with humility and love. Her dedication to her family carried on as she became a grandmother. She loved all of her grandchildren and was incredibly proud of living with three of her grandchildren daily. Tarla Daftari was the woman behind her husband’s business accomplishments. As the pioneers in the hospitality business, they worked hard at acquiring hotels across the Eastern seaboard. She worked hard at each one of her hotels, ensuring that details such as décor to money matters were looked after carefully. Even after the demise of her husband, she continued to acquire hotels and leaves behind a robust portfolio of businesses thankfully cared for by her loved partners Samir and Hemani Shah. She has been the guiding light for her grandchildren to uphold and cherish Indian values. She guided her children and grandchildren into their academic and professional lives that made her very proud. Her children and grandchildren will dearly miss her advice, lessons, parties, card playing, and most of all, the “Crazy Lady’s” humor. Tarla Daftari was an active member of the Atlanta community, contributing her time to institutions like IACA, ICRC, Santan Mandir, Jain Samaj, and Gujarati Samaj. She enjoyed fundraising and organizing events for the community. She was revered amongst the organization as the "go-to" person for events. She enjoyed arranging Garba, religious ceremonies, and traditional Indian plays. She is founding member of IACA and Sanatan Mandir. She will be missed by the community at large for her larger-than-life fashionable personality and her forward thinking. Tarla Daftari will be missed dearly by her Paana (Card) Group, Masti Group, and Saheli Group as she was steering a lot of the events to get her friends together. Her children and grandchildren will continue to miss their “Crazy Lady” and her funny stories. She will be remembered as a legendary icon who continously contributed to the community. One of her wishes at the top of her list was that in his lifetime there is a cure for Avi’s hemophilia . In lieu of flowers, please send donations to Hemophilia of Georgia at 8800 Roswell Road, Suite 170, Atlanta, GA 30350-1844 or at https://www.hog.org/fundraising/donate.asp

The family of Tarla Kishor Daftari created this Life Tributes page to make it easy to share your memories.

Tarla Kishor Daftari of Atlanta, Georgia, passed away on May...

Send flowers to the Daftari family.