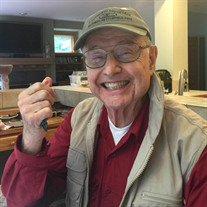 DOB:6-3-36, Dayton, Ohio DOD: 11-16-2020, Kennesaw, Ga Tom Caras was a humble servant, a brilliant physician, a proud veteran, a Renaissance man in his time, a passionate historian, a self-described naturalist; yes all of these describe him, but his undeniably most important role was as a cherished and beloved husband and father, a family man through and through. And here’s the thing: spend a little time with him, and you are part of his family. Why? Because he would get to know and care about you in short order. He genuinely wanted to learn about the people he encountered, making friends with people on the ski lift ride up the mountain, or folks he ran into along the trail. It did not take long to fall under his spell. He had the gift of listening as well as talking ;). He genuinely wanted to learn about, and mostly from, the people he encountered, pretty much conducting a “soft interview” with most people that he met. A rare commodity indeed -someone who really wants to hear what others have to say, and this made him magnetic. Everyone appreciates a person who cares enough to listen to them. Before long those who associated with our dad would join the ranks of those of us who adore and love him. He had the biggest, slightly crooked smile, and a twinkle in his eye, and was quick to laugh, even quicker to make you laugh, with his good-natured teasing such as an affectionate “go ahead, goat head” (Greek humor), and a few other choice abbreviations which I will not mention here. “Why don’t you go play in the street?” was another of his lighthearted methods to tell you he did not agree with you…. Yeah, I forgot to mention that he was a stubborn Greek, so him disagreeing with you was not a rare occurrence. Just ask our mom- who had to work hard over the years to keep the house and yard from going into retro jungle state. This leads me to another rare, but cherished quality of our dad. He was a Grade A+ on forgiveness. The man did not hold grudges. No matter how much we could yell back and forth with our “Pop”, two minutes later, it was all good. What a fine quality to emulate! Not always easy, but indeed a way to live. He loved God and he lived in peace and harmony with everyone because of that ability to be loving, forgiving and treat everyone with value. A shining example for us all. A final thought about our beloved dad, Tom Caras. If you did not know him on earth, you might want to search him out in heaven. He’ll be wearing his hiking khaki’s, hiking boots with duct tape, and God knows which of his 100 hats or T-shirts, but he will have the unmistakable slightly crooked grin and those bright twinkly eyes. In lieu of flowers, the family requests contributions be made to MUST Ministries, St. Joseph Catholic Church, or WellStar Community Hospice. • Tom Caras was born June 3, 1936 in Dayton, Ohio to Helen (Makris) and Sam Caras (immigrants from Greece) • Attended University of Louisville graduating in 1958 • Obtained his Medical Doctorate Degree from the University of Louisville in 1962, graduating first in his class. • Served in the US Army for 7+ years. During his service at the time of the Viet Nam War, he and a colleague used a novel approach to treat a major outbreak of Meningitis saving a multitude of soldiers https://jamanetwork.com/journals/jamainternalmedicine/article-abstract/575759 • Married the love of his life Carole Ann Raque on July 31, 1960 • Joined the Medical Practice of Benson, Jennings, and Randall in Marietta, Ga in 1969 where he worked until 2003. • After 10 years of retirement, he returned to work at WellStar Kennestone Cardiac Rehab from 2013-2017 • Survived by his beloved wife Carole, and adoring children: son and daughter-in-law, Dr. David and Paula Caras, daughter and son-in-law, Kathy and Kevin Golic, and daughter and son-in-law, Meg and Edwin (Suttner) as well as his eldest brother, Col. Louis S. Caras of Henderson, NV • Legacy includes his 6 grandchildren: Daniel Allen, Nickolas Caras (and wife Danielle), Jennifer Roberts (and husband Waylon) Forrest Golic, Mallory Golic and Kristina Allen • Preceded in death by his brother, Gregory Caras and sisters, Jodie Gianopulos, and Catherine Caras, all of Dayton, Ohio • Also loved and admired by extended family including many nieces and nephews and most everyone who knew him. • Cause of death was Alzheimer’s Disease.

DOB:6-3-36, Dayton, Ohio DOD: 11-16-2020, Kennesaw, Ga Tom Caras was a humble servant, a brilliant physician, a proud veteran, a Renaissance man in his time, a passionate historian, a self-described naturalist; yes all of these describe him,... View Obituary & Service Information

The family of Tom Caras created this Life Tributes page to make it easy to share your memories.

Send flowers to the Caras family.