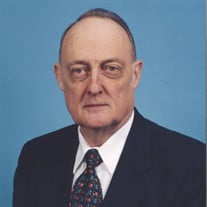 Thomas Herring Pratt, Jr. was born May 15, 1928 in Kingsport, Tennessee to Thomas Herring Pratt, Sr., and Josephine Russell Pratt. He was born a twin, the other not surviving. An older sister, Pat, now deceased, called him “Tuck”, short for “Little Tommy Tucker”. Tom graduated from Dobyns-Bennett High School and enrolled in East Tennessee State University after graduation. Two years in, he enlisted in the Navy and served aboard ship where he was a radio technician until 1952. After his service, he married Jean Kilday. Returning to college, he graduated and enrolled in Florida State University Graduate Chemistry School. His professor there moved to Yale and recruited Tom to join him where he received his Doctorate. Dr. Pratt took his first job at Rohm and Haas in Huntsville, AL where he worked on space and rocket technology. He was a real “rocket scientist”. His career took Tom and Jean from there to Philadelphia, PA, and Cumberland, MD. Upon his retirement in the late 80s, they moved to Marietta, GA. He continued his career part time with Burgoyne Company where he consulted on analysis of unexpected explosions, or as he said, “things that catch fire and go ‘BANG’”. He was a published expert in this field and served as an expert witness in litigation. Tom married Leota “Lee” Coffey Bierce on December 31, 2000. He was a beloved stepfather to Glen, Hal, Nora, and Paul, and step grandfather to Nathan, Kyle, Riley, Philip, John Paul, Aaron, Joe, Lee, Jesse, and Elizabeth. Tom and his beloved Lee traveled extensively until recently, and Tom spent many happy hours in his woodworking shop. Rather than flowers, please direct memorial donations to the Jean Pratt Memorial Fund at the Georgia Methodist Foundation, 15 Technology Parkway South, Peachtree Corners, GA 30092. Checks should be made out to the foundations with “For Jean Pratt Memorial Trust” noted. A private Graveside Service will be held. Mayes Ward-Dobbins Funeral Home in Marietta is handling the arrangements. www.mayeswarddobbins.com

The family of Tom Pratt created this Life Tributes page to make it easy to share your memories.

Send flowers to the Pratt family.