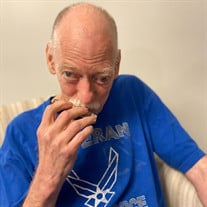 Vernon Michael Cooper, 68, of Marietta, Ga. passed away in his sleep in the early morning hours of August 16, 2021. Michael was born in Laredo, Texas in 1953 to Louise and Vernon Cooper. He was the third child and first son of six children. Vernon was in the military so Michael was raised all over. Michael went into the Air Force right after high school and served 4 years during the Vietnam era. He then enrolled at Northeast Louisiana University where he received his undergraduate and Master’s degrees. Michael loved people and enjoyed the social side of college as much as he did the academic side. He was one of the founders and participants of the University’s water ski team. When he met Maria in the fall of 1981, their love story began. It wasn’t long before they both realized they had met the love of their life. They were inseparable and they married in May of 1985. When Maria finished graduate school, they moved to Georgia in August of 1989. They both began working for Cobb/Douglas Developmental Disabilities. Maria as a Speech Therapist and Michael as a Masters level Behavioral Psychologist. Maria and Michael (M & M) welcomed their son Christopher to their world in 1992. Becoming parents is always the best blessing in life. Michael loved teaching Christopher how to play the guitar and harmonica. He also loved sharing his passion for classic rock and cars and cowboys. Christopher made Michael and Maria so proud when he became a R.N. working in the Emergency Department at Grady Memorial Hospital. M & M were a great team in the early years as part of the Evaluation Team for Developmental Services. In 2008 Maria took a position with the Cobb County School District. Michael spent his career working with the special needs population with Cobb County through all of the agency changes. He retired in 2013 after 23 years. Michael was known to be patient and kind, and was loved by his clients and co-workers who had the privilege of working with him. Michael began having health challenges in 2015. He was diagnosed with Alzheimer’s followed by open heart surgery in 2018. He went into Memory Care in December 2020 at The Phoenix at Johnson Ferry. Even as his health and memory declined, he remained the gentle sweet person he was and continued recognized Maria, Christopher and their beloved fur baby Henry. Michael is survived by his wife Maria, his son Christopher, his two sisters, Susan and Chris of Las Vegas, along with nieces and nephews. Mass was held at Transfiguration Catholic Church in Marietta on Thursday August 19, 2021 where they have been active members since 1997. A graveside service will be held in Louisiana on Sunday August 22, 2021 where he will be interred in a family cemetery.

Vernon Michael Cooper, 68, of Marietta, Ga. passed away in his sleep in the early morning hours of August 16, 2021. Michael was born in Laredo, Texas in 1953 to Louise and Vernon Cooper. He was the third child and first son of six children.... View Obituary & Service Information

The family of V. Michael Cooper created this Life Tributes page to make it easy to share your memories.

Vernon Michael Cooper, 68, of Marietta, Ga. passed away in his...

Send flowers to the Cooper family.