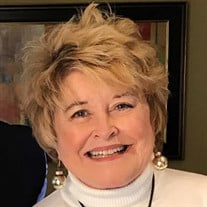 Virginia “Ann” Brown of Marietta, Ga passed peacefully on June, 21, 2021. Ann joined her Lord and Savior Jesus Christ after a lengthy illness. Ann was a beloved mother, daughter, sister and cherished friend to many. Beautiful inside and out and blessed with a candid sense of humor, Ann was quite memorably a true southern lady. She was born on March 17, 1944 in Dallas, Ga, and raised nearby on a farm in Powder Springs. Ann graduated from McEachern High School with honors. She was crowned both Homecoming Queen and Miss Kennestone Marietta during her high school years, and was a participant in Beta Club and Girl Scouts. Ann attended West Georgia College before graduating from the University of Georgia in 1965. There, Ann added UGA Homecoming Queen to her pageant titles and was also Sigma Pi Honorary Sweetheart. She loved her time as a member of Kappa Alpha Theta sorority and was ecstatic when her daughter and nieces later became her Theta sisters at UF and UGA, respectively. Prior to her return to Marietta, Ga, Ann resided in Orlando and Winter Park, Fla. where she worked as HR Director of Jacobson’s Department Stores nationwide for many years. Ann also enjoyed working as an administrator of a small law firm for more than two decades. She was a member of First Methodist Church and First Presbyterian Church in Winter Park. After moving to Marietta, Ann enjoyed volunteering and attending Sunday School through First Baptist Marietta Church. Ann’s church home was very dear to her. Ann is preceded in death by her parents Louise and Paul Wable and George Owen Brown. Louise, also known as Mom Mae, was a longtime resident and well respected member of the Marietta community. A wonderful mother, cook and homemaker, Ann took after her mother in many ways. Ann is survived by her beloved daughter Allison and her husband, Ann’s devoted son-in-law Jason Abney, of Mableton, Ga. Ann loved being “Gran” to her two grandchildren, Anna and Cole. Ann was so proud that Allison is following in her footsteps as a successful working mother, and knew that Allison was still working on the cooking part. Other survivors include Ann’s brother G. Owen Brown Jr. (Cheryl) of Marietta, Ga and sister Carolyn Brown Younginer (Joe) of Florence, SC. Also special to Ann were her nieces and nephew: Lori Cheney, Leslie Brown, and Mark Brown, all of Marietta, Kim Cosand (Matt) of Bristol, VA, Lisa Younginer of Gaithersburg, VA, and Mary Carol Younginer of Raleigh NC. Additionally, Ann was fortunate to be blessed with a large extended family and many dear friends. Services will be held at 2pm Friday, June 25, 2021 at Historic Mayes Ward-Dobbins Funeral Home Chapel at 180 Church Street in Marietta. 770-428-1511

Virginia &#8220;Ann&#8221; Brown of Marietta, Ga passed peacefully on June, 21, 2021. Ann joined her Lord and Savior Jesus Christ after a lengthy illness. Ann was a beloved mother, daughter, sister and cherished friend to many. Beautiful inside... View Obituary & Service Information

The family of Virginia Ann Brown created this Life Tributes page to make it easy to share your memories.

Send flowers to the Brown family.