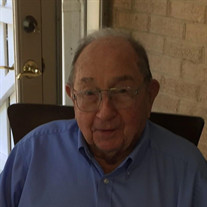 William (Bill) Hugh Dean, Jr, of Marietta, GA died at the age of 100 on Dec 25, 2020. Bill was a descendent of Thaddeus H and Asenath Smith McCleskey, some of the earliest Marietta residents, who moved to Marietta, GA in 1832. He was the second child of William Hugh Dean, Sr., and Berta Dobbs Dean, originally of Woodstock, GA. Bill was a US Army Veteran who spent 5 years in the service during WWII. He was a Captain in the Chemical Warfare Service branch of the US Army in the China/Burma/India theatre. After the war, he returned to Marietta to settle down with his family: his beautiful bride, Martha Love and his first born, Martha Rebecca. They moved to Laurens, SC, for his work with McNeel Monument Company, where his second daughter, Deborah, was born. The family moved back to Marietta in 1952 where he and Martha raised their daughters a mile off the square. During these years he served the community by helping people protect their families with insurance and through St. James Episcopal Church. Bill and Martha loved to travel and they took many trips around the country and Canada in their motorhome. Bill was a talented woodworker who throughout his lifetime did everything from carving wooden figurines and sculptures to turning cups, bowls, and ornaments, to building countless pieces of fine furniture. His craftsmanship was exceptional and highly regarded within the woodworking community. Upon retiring, Bill spent more time enjoying his hobby of woodworking, and ultimately turned that hobby into a second career turning urns for funeral homes both stateside and abroad. He continued turning urns to sell and other items for fun until he was 98 years old! He was determined to stay sharp and remain useful, as he put it. Bill was loved dearly by his family, friends, and many in his wider community. He had a great sense of humor and loved being the jokester and making people laugh. He was truly a force of nature who loved his family fiercely and worked tirelessly as a father, husband and friend, to create a strong foundation and bright future for his children, grandchildren and great grandchildren. He led by example, as a true leader does, and he was a steady rock to both his family and his community. He lived well, loved well, and has now entered a well-deserved rest. He died on Christmas Day, and while that is sad to those who will miss him, a dear friend’s daughter put it in beautiful perspective. She said, “he got to spend Christmas with ALL of his family – those who are here and those who have already died.” A man couldn’t wish for more on his final Christmas Day. Bill was preceded in death by his wife, Martha Love West Dean, and his daughter, Martha Dean Ball. Survivors include his daughter Debbie (Paul) Ducas; his grandchildren, Jeb (Jeneane) Ball, Troy (Moriah) Lane, Perry Love Doubrava, Andrea Love Ducas, John Ducas; and seven great-grandchildren. Due to Covid restrictions, there will be no visitation. The immediate family will hold an outdoor service in his honor on Saturday, January 2, 2021. Interment will be at a later date in Enon Cemetery, Woodstock, GA. In lieu of flowers, donations may be made to St. James Episcopal Church, 161 Church St., Marietta, GA 30060.

William (Bill) Hugh Dean, Jr, of Marietta, GA died at the age of 100 on Dec 25, 2020. Bill was a descendent of Thaddeus H and Asenath Smith McCleskey, some of the earliest Marietta residents, who moved to Marietta, GA in 1832. He was the second... View Obituary & Service Information

The family of William Hugh Dean JR created this Life Tributes page to make it easy to share your memories.

Send flowers to the Dean family.