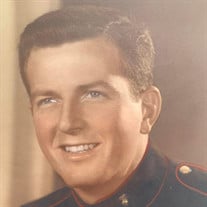 William Claude Gilstrap, age 91, of Marietta, Georgia died February 6, 2022. Claude was born December 16, 1930 in Albany, Georgia. He is predeceased by his wife Jacquelyn (Jackie) Whitfield Gilstrap; siblings Hiram (Buddy) E. Gilstrap, Jr. and David W. Gilstrap; children Amy Gilstrap Humphries and Stacy Gilstrap McEllen; grandson William David Butler (Davey) Gault. He is survived by daughter Karen Shaye (David) Gault of Powder Springs, son Mitch (Susan) Gilstrap of Marietta, son in-law Robert McEllen of Hickory, NC; seven grandchildren and four great grandchildren. At an early age, Claude’s parents Hiram and Ruth Gilstrap moved their family of five and settled in Atlanta in what is now considered to be West Midtown. He attended and graduated from O’Keefe High School in 1950. He excelled in both football and baseball, making the Atlanta City All-Star baseball team his senior year. While at O'Keefe, he met who would become the love of his life, Jackie Whitfield. After graduation and with the Korean war underway, Claude joined the US Marine Corp, enduring basic training at Parris Island. He would eventually be stationed at Camp Pendleton outside of San Diego, CA, working in supply logistics. On the base at Camp Pendleton was a golf course and Claude spent his idle time learning the game and beginning what would become a lifelong pursuit, ultimately resulting in a scratch handicap and the ability to shoot or better his age from 69 years old and onward. Upon being honorably discharged, Claude returned to Atlanta, courted and married his wife Jackie in 1953. The young couple settled in Atlanta and Claude began what would become a successful career in steel infrastructure sales by joining US Steel. 1955 would bring the birth of their first of three daughters Shaye, followed by Stacy and son Mitch. It was during this time that Claude honed another passion in his life - billiards. He was widely recognized as one of the best 9 ball players in the state of Georgia, and much to the disfavor of Jackie, was routinely able to help the growing family’s ends meet with his winning proceeds. He used to say “Jackie never missed seeing the blue cue chalk on my shirt after a long night at the pool hall”. Claude’s professional career accelerated when he opted to join the LB Foster Company in 1964. After a brief stint in Charlotte, NC, he was relocated back to Atlanta. He eventually rose to the position of Atlanta District Sales Manager, leading a team of hard charging, fun loving sales professionals, having the reputation of reliably meeting their commitments and having a great time in the process. As a manager, he was a servant leader, freely sharing his skills and expertise. He hired and mentored a number of team members that went on to build highly successful careers of their own and to this day remain true friends and grateful to have benefitted from his leadership. Claude moved the family to “the country”, settling in Marietta in 1968, and permanently retired his ”professional” pool cue. Days were spent following his kids excel academically and at sports while attending Marietta High School (MHS), passionately rooting on the Blue Devils, Braves, Falcons and the Georgia Tech Yellow Jackets and spending long, lazy days at Lake Burton and New Smyrna Beach. 1972 brought with it the addition of another daughter, Amy Jacquelyn, twelve years younger than her next oldest sibling. She was the light of her parent’s eyes, a source of immense pride and provided them another opportunity to raise and nurture a child. In spite of having “five parents”, Amy excelled academically at MHS, graduated with honors from Berry College and rose to the rank of Vice President, Suntrust Bank. Claude retired in 1986 and devoted his time to his growing number of grandchildren and his never ending pursuit of the game of golf. It was during this time, however, that he faced his greatest challenge. Over a period of seven years beginning in 1999, the lives of grandson Davey Gault and daughters Amy and Stacy were tragically lost. Even through such unendurable pain and anguish, Claude and Jackie, rooted by their love for each other, found the strength to persevere and found ways to help the family survive such devastating adversity. Claude then spent the following years devoted to and caring for Jackie as she faced a variety of illnesses and health related challenges. She ultimately passed in 2013, ending a wonderfully loving 60 year marriage. Being fiercely independent, Claude lived that way, maintaining an immaculately cared for lawn that was the envy of Longwood Drive and keeping up the family home until age 89. William Claude Gilstrap, loving husband, son and father. A successful salesman who never met a stranger. Devoted sports enthusiast, expert golfer and billiards player. A tough competitor in business, on the links and with a pool cue in his hands and who almost always found a way to come out on top. Once a Marine and always will be. Graveside services will be at 2:00 PM, Friday, February 11, 2022 at Kennesaw Memorial Park in Marietta. The family will receive friends from 5 to 7 PM Thursday, February 10, 2022 at the Historic Marietta Chapel of Mayes Ward Dobbins Funeral Home. Contributions may be made to Calvary Children’s Home calvarykids.org. Semper Fi!!!

The family of William Claude Gilstrap created this Life Tributes page to make it easy to share your memories.

Send flowers to the Gilstrap family.