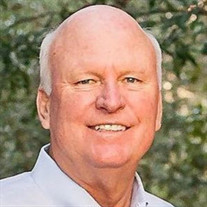 William Ronald Godwin, of Marietta passed away on Sunday May 3, 2020 at the age of 63 of a heart attack. Known as Ron, he was born September 27, 1956 in Mobile, Alabama to parents William A. Godwin and Mary May Godwin. Ron spent his youth in Mobile where he developed a life long love of golf. He married his high school sweetheart, Chere Williams Godwin, on March 27, 1976 and began to play golf professionally. He made a career change in 1980, to work in sales for CertainTeed Corp. and served as Southeast Regional Sales manager for 6 years. He welcomed his first daughter, Megan Godwin Jackson, on August 31, 1981 in Jackson, Mississippi. He moved his family to Atlanta where he welcomed his second child, Katherine Godwin Brink, on January 17, 1987. In 1988, Ron became a member of Pinetree Country Club in Kennesaw, Georgia. Pinetree would remain an important part of his life until his passing. He served twice as President and was a member of the board for many years. He spent his Wednesdays, Fridays and Saturdays with his beloved golf group playing his cherished golf course. Ron treasured his time at Pinetree, but most of all he treasured the friends he made there that were like family to him. In 1990, Ron started General Insulation Products Inc. with business his partners. His hard work heeded great success and the company grew to include locations around the southeast. In 1997, he sold General Insulation and began his next endeavor as the owner of Op 5, Inc. Ron was a keen businessman, but above all he believed that his employees were the heart and sole of his business. Along with his success in business, Ron was a devoted family man. Beloved by his two daughters, Ron was also a proud grandfather. In 2010, he welcomed his first grandson, Godwin Lee Jackson, followed by another grandson, William Hayes Jackson, in 2013. This past year he welcomed his first granddaughter, Mary Pate Brink, in September. Although his passing was sudden, his family takes comfort in knowing that he felt no pain and is now in heaven with his Lord and Savior rejoicing in eternity. A beloved husband, father, father-in-law, grandfather and a valued friend to many, his memory will be celebrated and cherished by all of those that knew him. His generosity, kind spirit and wonderful sense of humor touched all those that knew him and will remain in the hearts of all of those whole loved him most. Ron is survived by his wife of 44 years, Chere, daughter Megan Godwin Jackson of Watkinsville, daughter Katherine Godwin Brink and her husband James Edward Brink, Jr. of Marietta, brothers Kenneth Godwin of Alabama and Marshall Godwin of Virginia, and his 3 beloved grandchildren. He was a member of Marietta First United Methodist Church for 32 years. A memorial service will be held later this year when coronavirus restrictions are lifted. In honor and memory of Ron’s life and legacy, please consider donations to Young Life Southeast Region PO Box 7753 Marietta, GA 30065.

William Ronald Godwin, of Marietta passed away on Sunday May 3, 2020 at the age of 63 of a heart attack. Known as Ron, he was born September 27, 1956 in Mobile, Alabama to parents William A. Godwin and Mary May Godwin. Ron spent his youth... View Obituary & Service Information

The family of William Ronald Godwin created this Life Tributes page to make it easy to share your memories.

William Ronald Godwin, of Marietta passed away on Sunday May...

Send flowers to the Godwin family.