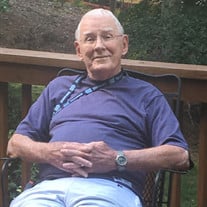 “To know him was to love him.” These words could not have been more true of our dad. William Alton Qualls was born on July 20, 1929 in Burlington, NC. He would always say in his typical joking fashion with his hand over his heart, “not just anyone can come from the state of North Carolina...you have to be special.” And special he was! Bill proudly graduated from the University of North Carolina at Chapel Hill, where he was there on a wrestling scholarship. He completed his degree in Political Science and was ALWAYS a proud, devoted Tarheel. It was rare that you didn’t see him in some sort of Carolina apparel or rooting for the Heels in football or basketball. Upon graduation from UNC, Bill entered into the United States Air Force so he could learn to become a pilot, a lifelong dream. He proudly served during the Korean Conflict for four years. Dad pursued a career in sales in the floor covering industry. Sales was the perfect profession for him because of his true love for people. His first job moved him to St. Louis, MO, where he fell in love with his beautiful secretary, Sally. The rest was history. They were married for 60 years and had three children: Keith Qualls of San Antonio, TX, Kimberly McQuaide (Bill) of Voorhees, NJ, and Kristi Borders (Mark), of Kennesaw, GA. He also had 6 grandchildren who he adored: Steven Sexton (Courtney), Christopher Sexton, Taylor Schwartz, Brendan Borders, Carson Borders, and Harrison Borders. The littlest of the bunch was his one and only great-grandson, Carter Sexton. Bill was an active member of Eastside Baptist Church where he loved serving Wednesday night suppers and standing at the back door of the church on Sunday mornings, happily greeting people with his one-liners or funny nicknames. He loved the Lord, and served his family as a devoted husband, father, son, and friend. Dad was an incredibly hard worker in everything he did. He always worked hard at his job, maintaining a beautiful yard, playing a much loved game of golf or tennis, or most importantly taking care of Sally through her Alzheimer's journey. Our dad will be sorely missed, but is looking down from heaven...happy, whole, and is with Jesus, and of course, his Sally Mae! A graveside service will be held in Burlington, NC in the near future. “I have fought the good fight, I have finished the race, I have kept the faith.” 2 Timothy 4:7

&#8220;To know him was to love him.&#8221; These words could not have been more true of our dad. William Alton Qualls was born on July 20, 1929 in Burlington, NC. He would always say in his typical joking fashion with his hand over his heart,... View Obituary & Service Information

The family of William Alton Qualls created this Life Tributes page to make it easy to share your memories.

“To know him was to love him.” These words could not have been...

Send flowers to the Qualls family.