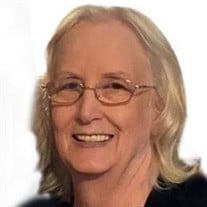 Wynona Dean Howell Barrow, affectionately known as Dean, passed away peacefully on Oct. 12 after a sudden illness. She was surrounded by her loving family. Dean was born on Feb. 18, 1954 in Brierfield, Ala. as the daughter of John and Dorothy Belcher Howell. The family moved to Austell in Cobb County, GA when Dean was in third grade. She graduated a year early from South Cobb High School. She earned a scholarship that enabled her to study in Europe for a year before enrolling at Kennesaw College. There she met the love of her life and best friend, Chris Barrow. They built a life together in Austell and celebrated their 48th wedding anniversary on Oct. 6. Dean worked in the banking industry for 30 years. Bank of America presented her The Customer's Experience Leadership Award in 2003. She retired in 2014. Family was everything to Dean. After raising her son James, she really enjoyed being Grammy to her granddaughters. She attended every dance recital, swim meet, and soccer match she could get to. Dean was an avid reader and was rarely without a book in her hands. She loved cooking. She especially liked preparing new recipes and discovering new restaurants for the family to try. Dean was preceded in death by her parents and a young sister, Wanda Howell. She is survived by her husband Chris, son James (Stacie) Barrow, granddaughters Olivia and Lilly, and surrogate grand to Jay Young and Kayla Young. She is also survived by siblings Johnnie (Alton) Griffin, Ray (Earline) Howell, Wade Howell, Henry (Judy) Howell, and Cody (Penny) Howell as well as many beloved nieces and nephews. In lieu of flowers, the family requests donations be made the Children’s Ministries (McEachern Kids) at McEachern Memorial United Methodist Church (UMC). A memorial service will be held at 4:00 p.m. on Oct. 21 at McEachern Memorial UMC followed by a reception. Mayes Ward-Dobbins Funeral Home Macland Chapel in Powder Springs is handling the arrangements.

Wynona Dean Howell Barrow, affectionately known as Dean, passed away peacefully on Oct. 12 after a sudden illness. She was surrounded by her loving family. Dean was born on Feb. 18, 1954 in Brierfield, Ala. as the daughter of John and Dorothy... View Obituary & Service Information

The family of Wynona Dean Howell Barrow created this Life Tributes page to make it easy to share your memories.