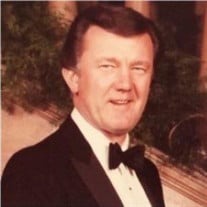 Anthony Wyatt Trescott (Tony) was born in Boston, MA on July 5, 1935, and died peacefully at his home Wednesday, June 3, 2020 in Marietta, GA. Tony is preceded in death by the love of his life for 61 years and first mate, Joey. He is also preceded by his sister, Connie Ferguson. He is dearly missed by his daughter, Luanne Bentley, son-in-law Drew Bentley, three grandchildren who admired and respected their Gonny, Taylor Bentley, Clarke (Laura) Bentley, Jackson Bentley, and sisters Ellen Ellis and Rene (Fred) Abeles. The son of Martha Ellen McCourt and Charles Edward Trescott, Tony attended Lehigh University in Bethlehem, PA, and graduated from the University of Washington, Seattle, WA in 1956. While at UW, Tony was a member of the Delta Tau Delta fraternity. He was elected to Pi Omicron Sigma, a leadership and service honorary, and organized a quartet and sang for university and civic functions. While at Lehigh University, Tony participated in varsity lacrosse and swimming, and he commentated a morning music and news show on the campus radio station. As the son of a naval officer, Tony graduated from Severn Prep School, Severna Park, MD at age 17 and applied to the U. S. Naval Academy with a deep desire to serve his country. He graduated from Officer Candidate School, Newport Rhode Island in 1956, where he was valedictorian of his class. While Tony was enrolled in the Navy Supply School in Athens, GA in 1957, he met his future bride, Joey Sawatzke, a UGA student scholar, Bulldog fanatic, Kappa Alpha Theta sorority member, and Red and Black school newspaper reporter. Their love story for the ages began there. In 1957, they married in Christ Church, St. Simons Island, and moved to Long Beach, CA, where their daughter, Luanne, was born. Shortly after Tony completed his duty on the USS Mansfield, Yokosuka, Japan, he began his career with IBM as a Sales Trainee in Panama City, FL in 1959. He worked with Big Blue until his retirement as U.S. Manager of Large Account Marketing in 1991. During his IBM career, Tony and Joey lived in Panama City, Atlanta (three times), Coral Gables (twice), Hollywood, FL and Orlando. Any IBM awards Tony received, he dedicated and credited to Joey and their life’s work. Tony served on the boards of The Arthritis Foundation, Leukemia Society, and United Way. Tony and Joey enjoyed trips to Savannah, Charleston Vermont, Ridgefield, CT, and Roaring Gap, NC with their Balcony Club of dear life-long IBM friends and colleagues. According to the Ship’s Log for the Southwind, Tony and Joey’s home on the water, their boating brought friends and family together from near and far for hours of relaxation, entertainment, beautiful weather, and spectacular destinations. The couple enjoyed retirement homes in San Francisco, Key Largo, Big Canoe, Waynesville, NC, and Pawleys Island, SC. He was active in various churches and was most recently a member of Belin United Methodist Church in Murrell’s Inlet, SC. Wishing to be near their family, Tony and Joey relocated to Sterling Estates West Cobb in 2018. Tony was an avid reader of biographies, particularly of military leaders and entrepreneurs. He was known to read them repeatedly, as evidenced by his nearly spineless copy of Truman. His acuity for story telling with precise attention to details and dates will long be cherished and remembered. Tony’s patriotism, sense of duty, sound leadership, good judgment, ingenuity, foresight, and humility during active duty and in his career at IBM were admired by all who knew him. Tony’s legacy of love for his beloved wife Joey for over 61 years was especially heroic in the way he cared for her so tenderly in her extended illness. Tony and Joey’s love story for eternity continues as they cruise God’s celestial shores hand-in-hand. He was an equally devoted and faithful father, grandfather, and brother. He will always be remembered by his family for his enthusiasm for life, great faith in the Lord, and his deep love for and pride in his grandchildren. He lived out for them the life principles of accountability, responsibility, and living below his means. The family deeply appreciates and wishes to thank Tony’s team of medical professionals, devoted caregivers who tenderly cared for Tony, and the excellent staff at Sterling Estates. A private celebration of Tony’s life will be planned. Memorial gifts to honor Tony may be sent with a notation for the Building Fund to Marietta Community Church, 1349 Old Highway 41, Marietta, GA. 30060. Mayes Ward-Dobbins Funeral Home in Marietta is handling the arrangements. www.mayeswarddobbins.com

Anthony Wyatt Trescott (Tony) was born in Boston, MA on July 5, 1935, and died peacefully at his home Wednesday, June 3, 2020 in Marietta, GA. Tony is preceded in death by the love of his life for 61 years and first mate, Joey. He is also preceded... View Obituary & Service Information

The family of Anthony Wyatt Trescott created this Life Tributes page to make it easy to share your memories.

Send flowers to the Trescott family.