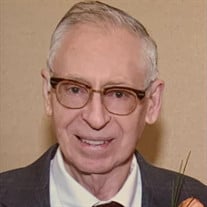 Born September 28, 1934, in Greenville SC, he was the only son of Oscar & Nora Crenshaw. Moe, as he was known by many, grew up on the family farm before graduating from Clemson University with a degree in Electrical Engineering. He moved to Atlanta and began working at Lockheed Martin Corporation the week after graduation; remaining a dedicated employee with a distinguished career that lasted close to an astonishing 58 years. His work with Lockheed enabled participation in assignments and projects throughout multiple states, Canada, and Europe. On many of these trips, Moe was accompanied by Alice, his bride of 60 years. The two of them attended Marietta First Baptist, before health kept them homebound. Alice was laid to rest in April of 2021. Moe is survived by his son Andrew, his wife Christina, and grandson, Zeb, who commuted frequently between Atlanta and Kennesaw, weekend after weekend, to visit and spend time working on projects around the homestead with him. His youngest son John, and his wife CJ, beat a regular path through the woods, sharing many conversations over the antics of all family members, and providing Moe with many a reason to retreat to the computer so he could research genealogy. His grandson Sam, and his wife Jerilyn, supplied him with great-grandsons Michael, James, and Christopher; plus, the biggest smile-producer: little Alice Clarissa Crenshaw, the first Crenshaw-born girl in six generations, and aptly named after Moe’s wife Alice. His grandson John Mark prompted him to ask many times ‘where is he now’ due to his frequent adventures to various states and countries on impulse with seemingly little to no planning. His grandson Stephen kept him guessing about whether or not he would be wearing shoes as he walked his dog, Snacks, by their house every day for the last few years. From humble beginnings on the family farm through a distinguished career as an engineer, Moe displayed commitment and loyalty; and true to his calling, Moe worked tirelessly to ensure that our family was safe and comfortable. He will be missed.

Born September 28, 1934, in Greenville SC, he was the only son of Oscar & Nora Crenshaw. Moe, as he was known by many, grew up on the family farm before graduating from Clemson University with a degree in Electrical Engineering. He moved to... View Obituary & Service Information

The family of Bevely Maurice Crenshaw created this Life Tributes page to make it easy to share your memories.

Send flowers to the Crenshaw family.