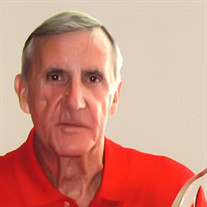 Bobby H. Baker “Mister B” of Marietta, died July 2, 2021. Services will be held Friday, July 9th at 11:00am in Mayes Ward Dobbins Macland Chapel with Reverend Richard Hemphill officiating. Interment at Kennesaw Memorial Park. Family will receive friends from 9:30am to 11:00am prior to the service. He had a 30 year career with AT&T before retiring and was a member of Macland Baptist Church. Bobby’s real passion was cars and was a founding member of the Creepers Car Club that originated in Smyrna in 1960. The Creepers Car Club remains as one of the largest active and continuously running street rod clubs in the United States. He was also an instrumental early member of the Georgia Street Rod Association, the National Street Rod Association and one of the first members of the Mustang Club of America. Survivors include wife - Gale Castellaw Baker, Son - Bret (wife-Malissa) Baker, Daughter Brook (Husband-Tom) Ayres, Grandchildren -Tom B. Ayres, Avery Ayres Neumann, Brooks Baker, Bailey Baker, Great Grandchild to be - Baby Neumann, Sister in Laws - Joan Baker, Ruth Castellaw. Honorary Family Member - Greg Grier. He was predeceased by his brothers Thomas and Jimmy Baker and Brother In Law - Coleman Castellaw. His passion was finding and restoring classic cars and driving them to shows all over the country. He had many cars over the years but was especially known for his 1932 Ford Roadster named “Mister B” that has been in the family for 60 years. His life in cars began in high school where he had a ’32 Ford coupe, he then began drag racing in the early 60’s, had a Top 10 Show car in the U.S. in the mid 60’s and was an early pioneer of street rodding where cars had to be driven to shows to win awards. He also loved Mustangs and was one of the first members of the Mustang Club of America that was founded in Atlanta in the early 70’s and is the largest Mustang Club in the U.S. Anyone attending the service that has a classic car is encouraged to drive it and special parking will be provided in the front of the chapel. In lieu of flowers, contributions may be made to the Calvary Children’s Home at https://calvarykids.org/donate/

The family of Bobby H. Baker created this Life Tributes page to make it easy to share your memories.

Send flowers to the Baker family.